I realize this is starting to sound old but restoration guru Robert Harris and a handful of impassioned journalist/columnists (myself among them) are still trying to persuade MGM honchos to agree to an independently funded restoration of the 70mm, 202-minute roadshow version of John Wayne‘s The Alamo (’60). I wrote about this situation twice in late May. The second piece (posted on 5.31) included a statement from MGM senior vp for library rights management Trish Francis that indicated she and her colleagues don’t understand what’s going on. Francis said “the film is not in danger of being lost,” but she was referring to the 35mm elements that went into MGM’s 2000 DVD. The 70mm elements, trust me, are in grave peril. 70mm is the format that Wayne shot the film in and which needs to be preserved. I saw some fragments of these elements at a special screening in Burbank last week, and they reiterated the obvious. 70mm delivers exceptional clarity and detail that’s above and beyond what you can get from 35mm. But MGM doesn’t give a damn, it seems. To them a 35mm rendering is just fine. Why get your knickers in a twist?, leave well enough alone, etc. 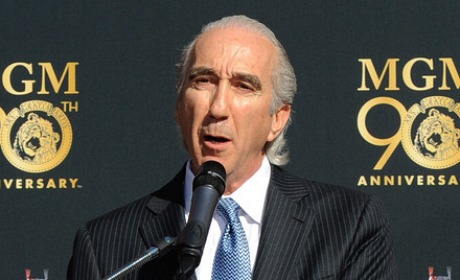 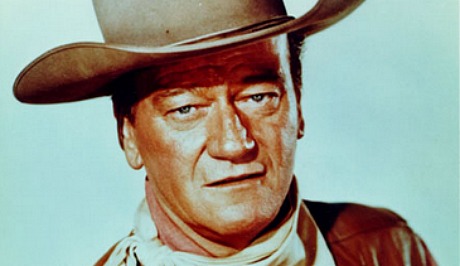 John Wayne, who would stride into MGM offices, break down Barber’s office door and slap some sense into him if he wasn’t dead and gone. Wayne, I mean.

A few weeks ago Harris had nearly persuaded MGM to allow an outside source to pay for the restoration, which will cost something like $1.3 million. MGM was planning to donate $5 grand to the effort (they haven’t much capital these days) but then they suddenly turned around and said no. They can’t and won’t fund a restoration on their own (okay, fine, we understand) but they won’t allow an outsider to pay for it either, apparently because they feel it’ll make MGM look like pikers. So MGM has the film in a double bind, and their position seems to be “let it rot.”

It’s entirely conceivable that MGM chairman and CEO Gary Barber hasn’t heard about the Alamo situation, and that if someone brought it to his attention he might consider it trivial or irksome. But Barber is the guy in charge (his second-in-commands are MGM motion picture group president Jonathan Glickman, television and digital group president Roma Khanna and CFO Dene B. Stratton) and so we must now delve into Barber’s head as he drives to work in his super-expensive car and talks to himself about the fate of The Alamo‘s 70mm elements. Barber is sipping from a cappucino grande as he cruises down Beverly Glen Blvd. and listens to tunes on Spotify. The time is 8:35 am.

“You can watch The Alamo on DVD and on streaming…what’s the problem?,” Barber says to himself. “It wasn’t that great a movie to begin with. Why did I even pledge to spend $5 thousand on restoring the 70mm version anyway? Mr. and Mrs. Joe Popcorn don’t give a shit and frankly neither do I. I have to generate big money for this second-rate company or I’m out on my ass and they want me to pay attention to a 54 year-old John Wayne film that never mattered very much in the first place? Don’t I have enough aggravation?

“Yeah, I know, I know…all I have to do is say ‘okay, guys…if you can raise the money yourselves you can restore it on your own…no problem and go with God.’ But that will indicate a certain benign weakness on MGM’s part. And that indication will arouse the predatory instincts of MGM’s competitors and then we’ll really be in Shit City, even worse than we are now. A leader like myself must be the Good Shepherd. He must be strong and firm and protect his flock. Maybe that’s the wrong analogy. Maybe MGM needs me to be Don Corleone, and if that’s the case then I know one thing — Don Corleone doesn’t let somebody else restore a family asset.

“It is a measure of MGM’s power and potency in the marketplace that if we decide to let The Alamo‘s 70mm elements disintegrate into nothingness then we will fucking do that because we are the master of our own universe, and therefore of our own assets. Even if it means the destruction of a moderately respected large-format film, MGM must insist on sailing its own ship, come hell or high water. In order to prove our strength, we must be willing to let Wayne’s 70mm epic die from deterioration. We must be willing, like men, to eliminate it like a farmer must be willing to slit the throat of a lamb. Are we not men? You have to be hard in this world. Sometimes you even have to be cruel.

“We’re talking about a matter of corporate principle and the perception of virility and conviction. So no offense but honestly? Eff John Wayne, eff the spirit of the Alamo defenders, eff Robert Harris, eff those snooty elites who believe there’s an important difference between a 35mm-sourced DVD image and a 70mm-sourced high-def rendering, eff Chill Wills and Richard Widmark and Laurence Harvey…screw all those guys! I’m alive and I’m they’re not. And double-eff Frankie Avalon! Wait, is Avalon alive? You know what? Eff him either way!” [Wells note: Avalon, 74, is alive and well.]

In tomorrow’s episode, the ghost of John Wayne hears the Philistine rantings of Gary Barber and swirls down from the heavens and into the plush offices of MGM to have a serious discussion. [Beep-beep] Barber: “Yes?” Secretary (on intercom): “Mr. Barber? A Mr. Wayne to see you.” Barber: “Wayne who? Li’l Wayne?” Secretary: “No, sir. His name is John Wayne. He says you know him.” Barber: “I don’t know him and I don’t have time for this. Get rid of him.” Secretary: “He says you do know him, sir.”