I have this sense of having seen too many romcoms about under-40 couples (partly GenX but most GenY) taking the longest time to either find their ideal romantic partner or, having found him/her, taking eons to pull the trigger about moving in together or getting married or having kids.

I’m telling myself that these films — the latest being The Five Year Engagement (Universal, 4.27) — are metaphors for a general sense of under-40 futility out there — cynical attitudes and expectations, shitty jobs, crappy paychecks and “the Boomers have screwed us so what’s the point of shouldering too much responsibility?…we can’t afford that much and who knows when the next recession will come?”

You can’t turn off the hunger or instinct for love, sex and procreation, of course, and clearly there are thousands of rich or flush GenXers like Judd Apatow who’ve gotten married and have had kids, etc., but middle and lower-middle under-40s seem to be seriously ambivalent about taking the next step toward anything. They’d rather shoot the shit and hang out at cafes and text and go to Cancun and piddle around. Generation Flounder, Generation Procrastinate, Generation Wank. If this isn’t true why do I have a sense of so many movies and TV shows about romances that are endlessly delayed for this and that reason? Later.

On top of which I can’t buy into any film in which Jason Segel, the Manatee of GenY comic actors, is the engaged bachelor or groom or guy in a serious relationship. I look at him and I think indulgence and corpulence. Ice cream, Hostess Cupcakes, cheesecake, cheeseburgers, bananas, peanut butter, pasta, etc. I can’t “be” him and he can’t “be” me as I watch one of his films. He gives me the creeps. 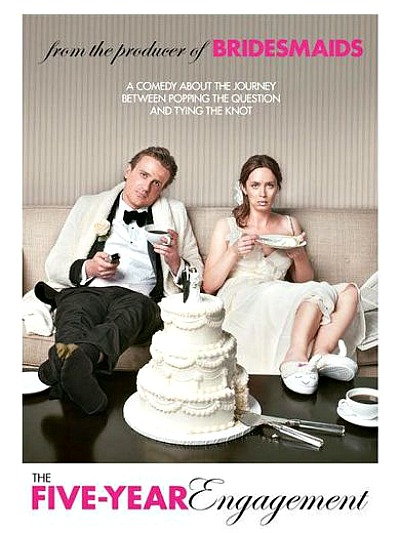