GenY Is Beyond Screwed

In a 3.26 Esquire piece called “War Against Youth,” David Marche explains how the degree to which Boomers (and, to some extent, older GenXers) have stuck it to GenY is really without historical precdent. No generation has ever robbed and undermined another generation quite like this. In fact, when has an American generation ever made things worse for a younger one? 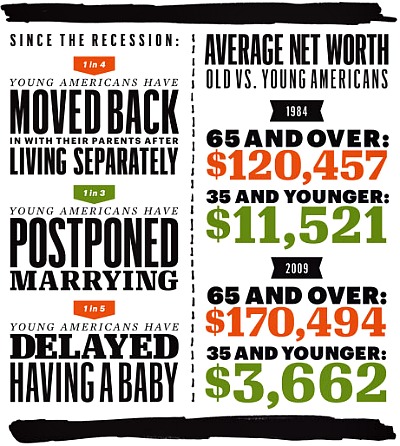 “Since the beginning of the Industrial Revolution, human potential has been consistently growing, generating greater material wealth, more education, wider opportunities — a vast and glorious liberation of human potential,” Marche begins. “In all that time, everyone, even followers of the most corrupt or most evil of ideologies, believed they were working for a better tomorrow. Not now. The angel of progress has suddenly vanished from the scene. Or rather, the angel of progress has been sent away.

“Nobody ever talks about generational conflict. Who wants to bring up that the old are eating the young at the dinner table? How are you going to mention that to your boss? If you’re a politician, how are you going to tell your donors? Even the Occupy Wall Street crowd, while rejecting the modes and rhetoric and institutional support of Boomer progressives, shied away from articulating the fundamental distinction that fills their spaces with crowds: young against old.

“David Frum, former George W. Bush speechwriter, had the guts to acknowledge that the Tea Party’s combination of expensive entitlement programs and tax cuts is something entirely different from a traditional political program: “This isn’t conservatism: It’s a going-out-of-business sale for the Baby Boom generation.” The economic motive is growing ever more naked, and has nothing to do with any principle that could be articulated by Goldwater or Reagan, or indeed with any principle at all. The political imperative is to preserve the economic cloak of unreality that the Boomers have wrapped themselves in.”