Frazzled cameraman: “How, come, Simon, whenever I’m with you, I put my life in danger?”

Zen-Minded Journalist: “Because putting your life in danger is actual living. The rest is television.” 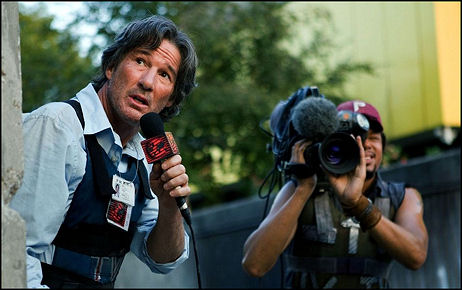 This is a line heard at the end of the trailer for Richard Shepard‘s The Hunting Party (Weinstein Co., 8.17), a thoughtful actioner previously known as Spring Break in Bosnia.
It’s basically about three guys — a TV journalist on the downswirl (Richard Gere), his smart-ass camera operator (Terrence Howard) and an upstart journalist whippersnapper (Jessie Eisenberg) — who embark on an impulsive, what-the-hell? mission to find the no. 1 war criminal in Bosnia. Naturally, complications ensue.
An HE reader who worked on the shooting and cutting of the film says he’s “extremely proud of this movie” and that “in this insane marketplace of sequels and sequels-to-sequels, an original non-cookie cutter movie needs all the love and attention it can get.” True enough….no, obviously true.