“And now here is Heather Graham, who demurs when you ask her age even though simple math shows it to be 37, shivering in a too-cold hotel suite wearing a borrowed dress that shows her arm flab and Versace shoes that pinch her feet, and she’s promoting an inert little movie called Gray Matters that will perform so poorly in the U.S. it won’t even be seen in Canada until the end of June, and then only in a straight-to-video release.” — from a Toronto Globe and Mail profile by Simon Houpt. 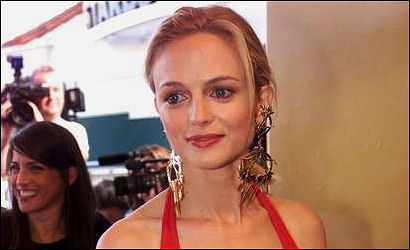 Arm flab? The disdain and outright cruelty contained in this graph is pretty stark. I’ve written snippy or unkind things about this or that performer, but I would never make it this mean. Houpt is a good writer, but where am I getting the feeling he may be dealing with with yin-yang feelings? (Wants to biblically “know” Graham, knows he can’t, decides to trash her.) She’s been on the ropes for some time now and…well, it’s a tough road out there. For a lot of us. I don’t see the point (or gain) in rubbing in the salt.