I watch the Godfather films (Parts I & II but not Part III) every three or four years. I’ll probably pop open the 2008 restored versions over the next two or three weeks. All hail this mecca of American cinema…this church, this temple, this place of worship and meditation, this wailing wall, this well of souls, this visit to a chapter in the young movie-nurturing life of Jeffrey Wells, this movie-comfort blanket to end all movie-comfort blankets.

Last weekend I watched Kim Aubry‘s Emulsional Rescue, a 19-minute doc about the restoration of the first two films. God, it’s so glorious to just settle into this tale of heroism and devotion and nobility — a story of a team of good guys (led by blue-chip restoration guru Robert Harris) saving the Godfather films and making them look better than ever before. And ohhh, those earthy ambers and Gordon Willis blacks!

If you’ve never had the pleasure, please set aside 19 minutes and dive in…

With the 50th anniversary of the theatrical debut of Francis Coppola‘s original Godfather less than a month away, I’ve been asking myself why there’s still no Bluray version of the chronological, extra-long Godfather saga — a 269-minute version of Part I (young Vito in Sicily to Michael murdering the heads of the five families in 1955) and a 149-minute version of Part II (strictly Michael from Lake Tahoe to Miami, Havana, New York, Las Vegas, Washington and back to Tahoe). That totals out at 418 minutes, or 2 minutes short of 7 hours. And that’s without Part III, which no one cares about.

This fan edit DVD version looks like hell, of course. So to properly celebrate the 50th why doesn’t someone get the lead out and issue a 1080p version? Or am I missing something?

Yes, I’m aware that the Coppola-approved The Godfather Saga — A Novel for Television, which aired in 1977 and obviously encompassed only the first two films, ran 435 minutes — 7 hours and 15 minutes or 17 minutes longer than the above-mentioned DVD set. A Coppola-sanctioned Bluray version of this one-time-only presentation would be a great thing to have and hold. 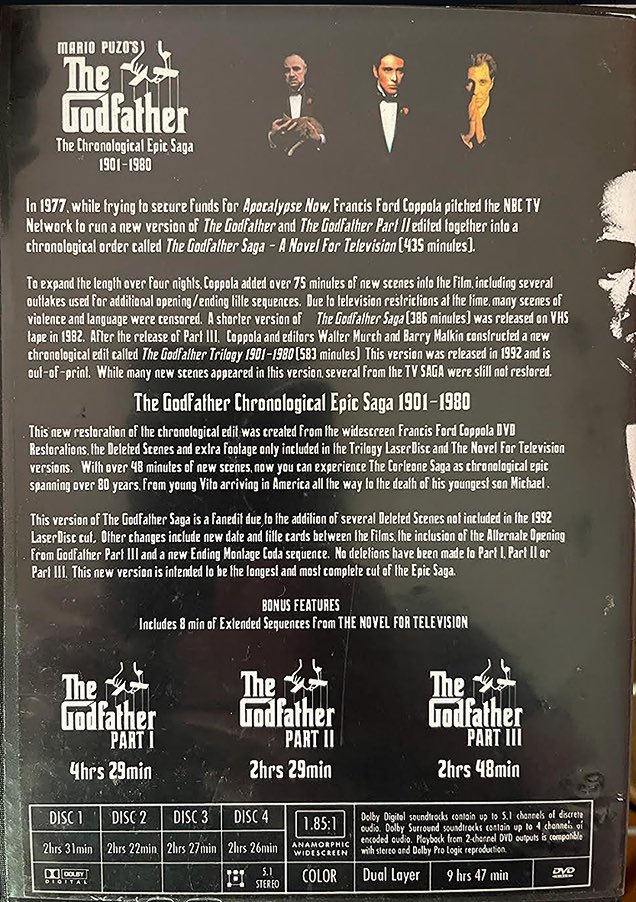