Stephen Daldry‘s The Reader, a well-made, high-toned Holocaust drama that many critics and smartypants-types have dismissed due to its cool tone and lack of an emotionally cathartic finale, has been included among the five nominees for Best Drama for the Golden Globe awards, which were announced early this morning. What’s this about? Is this a result of Harvey Weinstein having worked the room, leaned on Hollywood Foreign Press voters, etc.? What’s the back-story?

The other four dramatic nominees are David Fincher‘s The Curious Case of Benjamin Button, Ron Howard‘s Frost/Nixon, Sam Mendes‘ Revolutionary Road (yaaay!…finally gets its due!) and Danny Boyle‘s Slumdog Millionaire. The shafted, elbowed-aside would-be nominees are Milk, Doubt, The Visitor, Gran Torino, Che and Nothing But The Truth.

Happy-Go-Lucky was nonsensically nominated in the Best Comedy/Musical category and WALL*E was among the Best Animated Feature noiminees.

The candidacies of Golden Globe Best Dramatic Actress nominees Kristin Scott Thomas (I’ve Loved You So Long) and Kate Winslet (Revolutionary Road) have been literally saved by the HFPA. If they hadn’t been nominated this morning (on top of their being ignored by LAFCA, NYFCC and BFCA) their wattage would have been seriously diminished as far as the SAG Awards and Academy noms would have been concerned.

Rachel Getting Married‘s and Doubt‘s Meryl Streep were also nominated in the Best Dramatic Actress category. Wait a minute — the Globes have blown off Frozen River‘s Melissa Leo ?

Due respect, but Leo’s performance in that little snow-covered, illegal-alien-smuggling movie was a greater, fiercer and more artful emotional-volcano display than what Angelina Jolie delivered in The Changeling — and yet Jolie was Globe-nominated, at least in part because they want her to show up for the ceremony. Ratings be damned — this isn’t right. Jolie did a fine job but shame on the HFPA for dissing Leo. Pick up your torches, cans of lighter fluid and three-pronged pitchforks on the corner of Robertson and Santa Monica starting at 6 pm this evening. Look for a white flatbed truck.

The torches and pitchfork protest will also be about the omission of Revolutionary Road ‘s Michael Shannon from the Best Supporting Actor nominees, and about the mind-blowing, tongue-hanging-out, gah-gah inclusion of Ralph Fiennes ‘s performance in The Duchess — one of the biggest where-the-fuck-did-that-come-from? nominations in Golden Globe history.

I for one am delighted with Tom Cruise being nominated in this category for his maniacal movie-mogul performance in Tropic Thunder — he was extremely funny and deep into the sensibility of a typical killer CEO type — along wth Robert Downey, Jr.‘s turn as Kirk Lazarus, although Downey’s is surely the more widely admired and supported performance in this Ben Stiller film. 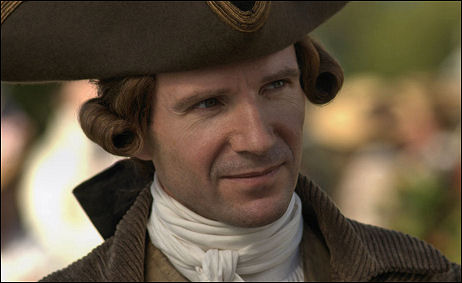 The Dark Knight‘s Heath Ledger was also nominated, of course, as was Doubt’s Philllip Seymour Hoffman.

One surprise among the Best Dramatic Actor nominees is Brad Pitt‘s for his work in The Curious Case of Benjamin Button. He’s just not strong enough in this David Fincher film to warrant an acting nomination. The HFPA just wants him to show up at the ceremony for the sake of ratings. (It would have been fine, however, if they’d nominated Pitt for his Burn After Reading performance…in the Supporting category, of course.)

But the biggest Best Dramatic Actor surprise is the omission The Vistor‘s Richard Jenkins. Why was Jenkins tossed off the boat? Because his attendance at the GG ceremony won’t goose the ratings. And yet, as HE reader Scott Mendelson has put it, The Vistor “is basically a one-man show, for all intents and purposes. The only reason anyone ever talked about it was due to Jenkins’ breakthrough performance.”

Revolutionary Road’‘s Leonardo DiCaprio, dissed and ignored by the critics’ groups so far, finally got a deserved Best Actor nomination. Frost/Nixon ‘s Frank Langella, Milk‘s Sean Penn and The Wrestler s Mickey Rourke were also nominated — all totally expected. The likely winner at this point would seem to be Penn.

The Best Motion Picture Comedy or Musical nominees are Burn After Reading (my personal favorite in this category), Happy-Go-Lucky (oppressive happy-Poppy vibes do not in any way make this film a comedy, and it has no music so this categorization is total bullshit), In Bruges (a few laughs, yes, but not that many — it’s hardly comedic), Mamma Mia! (a joke), and Vicky Cristina Barcelona (my second favorite nominee).

Forget the Best Animated Feature nominees — WALL*E is going to win it.

The Best Foreign Language Film nominees are The Baader Meinhof Complex, Everlasting Moments, Gomorrah, I’ve Loved You So Long and Waltz With Bashir.