L.A. Times columnist Patrick Goldstein has seen James Gray‘s We Own The Night, which will debut in Cannes towards the end of next week, and he says that for Gray “it’s a big breakthrough. It’s a searing family drama as well as a cops-versus-criminals thriller with the same sticky web of loyalty and rivalry seen in Martin Scorsese‘s best work. 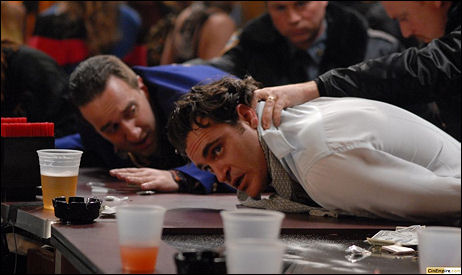 “Joaquin Phoenix is the family black sheep, running a mob-owned nightclub, while Mark Wahlberg has become a cop like their father, played by Robert Duvall. Although Gray still goes for quiet, underplayed emotion, he also ratchets up the suspense, providing many of the elements of a commercial thriller, most notably a bravura car-chase shootout filmed in the midst of a driving rainstorm.”