It’s 9:55 pm and all of Cannes is doing the Friday night mess-around. I’ve been invited to a Soho House party at a medieval castle west of town on the coast called Chateau de la Napoule, but I can take it or leave it. That’s because for the last half-hour I’ve been tripping on dozens of musings and fond recollections of Joel and Ethan Coen‘s No Country for Old Men, all comprising a general awareness that this is a major, major film. 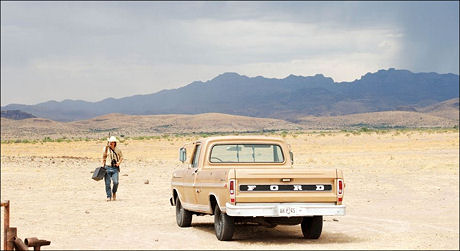 I’m speaking of an obviously brilliant action thriller that’s been made with such exactitude and smart-guy expertise, and is so full of meditative sadnesses and poetic brush strokes, and which exists on a plane so far above your typical violent crime film — the poisoned karma of drug money, a demonic hired gun on the prowl, etc. — that calling it a crime film almost feels like a kind of injustice. The damn thing is just staggering.
Based on the Cormac McCarthy novel, Old Men is all about silences and suspense and delivering the story in visual terms on the level of…I was going to say Alfred Hitchcock but Old Men‘s technique even surpasses some of his best stuff. The plot unfolds with such assured visual panache that it shares many of the virtues of the great silent films of the ’20s.
No Country for Old Men is the Coen’s best dark-places film — fuller and more refined than the classic Blood Simple, more solemn and straight-on emotional than Miller’s Crossing, and at least on par with their exquisite, much-loved Fargo. I have to scoot off to that castle party but I’ll get into this tomorrow morning. But tonight’s screening (it began around 7:25 pm) was my first occasion for true elevation. I still feel like I’m ten or fifteen pounds lighter. Seeing amazingly well-done films makes you forget about a lot of stuff. They put you in another realm.

May 18, 2007by Jeffrey Wells26 Comments
« Previous post
McCarthy on “No Country”
Next post »
Goldstein on Gray’s “Night”