I had a few problems with the first half of Gone Baby Gone when I first saw it three or four weeks ago. On top of which I was so whipped I had trouble keeping my eyes open. On top of which I had to be somewhere so I bailed at the one-hour mark, intending to catch it again in a more rested state. I saw it again last week and this time wide awake and right to the end, and it was a whole different deal. 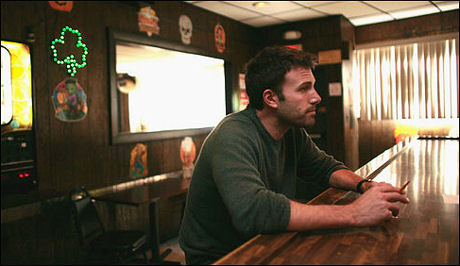 I still have beefs, but the ending is quite strong — deliciously disturbing, I’d say — and in my book that’s almost the whole ball game.

For the finale alone, Gone Baby Gone is a first-rate drama. It’s also a formidable Boston crime film. The atmosphere is genuine, if not quite in the rich-underworld vein of Peter Yates‘ The Friends of Eddie Coyle. It’s a morally complex film that leaves you teetering on a seesaw with a shot of irony that doesn’t wash out, and in fact stays with you for days.

Ben Affleck has done a better-than-decent job in his maiden directing effort, and with the acclaim this film is already getting he’ll have gone a long way to erasing memories of his career-destroying relationship with Jennifer Lopez. He’s scored as a director, he can still work as an actor (as far as that goes) and he can kick ass any day he wants as a political commentator or candidate, even. He’s totally fine.

The best kind of endings build to a climax and drive their thematic point home clear and true. But a Gone Baby Gone-type ending — one that pulls you in conflicting ways with equal force, and both seeming like the “right” course — is nothing to snort at. It’s not quite up to the legendary ending of Eric von Stroheim‘s Greed, but it’s aiming at the same archery target. (And it hits it.) And if you ask me it packs a slightly stronger punch than the finale of Clint Eastwood‘s Mystic River. 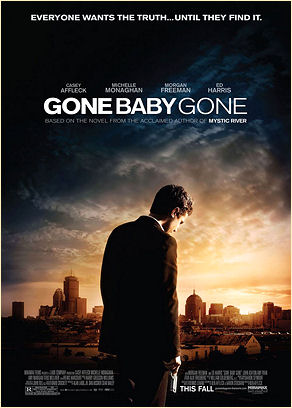 Eastwood’s ’03 film shares two things with Gone Baby Gone. Both are based on Dennis Lahane novels, and both are about decent working-class Dorchester folks who’ve pretty much given up on the law and have decided to apply their own solution or justice when it comes to the fate of their children.

I’m not going to spill anything specific, but Gone Baby Gone is basically about a search for a 4-year-old Dorchester girl — the daughter of an empty, emotionally unstable floozie and coke addict (Amy Ryan) — who’s apparently been kidnapped, and a long search for the truth about what why she was taken, who took her and why.

The main problem, for me, is that Patrick Kenzie and Angie Gennaro, the neigh- borhood private detectives who are called in on the case, are played by Casey Affleck and Michelle Monaghan.

Their performances (especially Affleck’s) are solid, but there’s no buying a couple of actors who look like they’re in their mid to late 20s as case-hardened pros. Sorry, but I need to see people in their mid to late 30s (and looking it) playing these parts. (Affleck and Monaghan were 31 and 30 when they shot the film.) The movie tries to diffuse the issue by having a couple of characters say “how old are you?” to Affleck, but young is young. 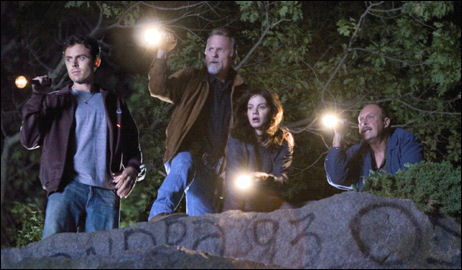 Plus there’s a difference between a whodunit being “complex” and verging into “what the fuck?” territory. Maybe I’m just not smart enough (I got a few As but mostly Bs in high school), but I was having trouble following some of the twists and turns. There’s a scene at a rock quarry that doesn’t make a lot of sense. (I’ve seen it twice and I still don’t know what happened.) My head was spinning during parts of the third act. Maybe Ben Affleck should have aped Clint’s Mystic River pace, or otherwise made it a little easier for dummies like myself to keep up.

Amy Madigan plays the aunt of the four-year-old who hires Kenzie and Gennaro. Morgan Freeman plays a police captain and Ed Harris and John Ashton are detectives involved in the case. Titus Welliver plays Madigan’s husband. Nobo- dy’s interest or agenda is quite what it seems at first, but then crime whodunits are always peeling away at the onion.

I say again that a movie that ends this well deserves an audience. For all the irritants, Gone Baby Gone needs to be seen and thought about afterwards. It’s unusual for a crime drama to leave you with this much moral aftermath. And all the hubbub about Casey Affleck’s performance is warranted. He acts and sounds like a real Boston slouch-around, and he almost overcomes the too-young issue because of it. Between this and his arresting turn in The Assassination of Jesse James by the Coward Robert Ford, ’07 has been quite the year for him. Cheers.