Gone With The Wind Deep-Sixed in Memphis

26 months ago former N.Y. Post film critic Lou Lumenick called for a shunning of Gone With The Wind because of “undeniably racist” attitudes embedded in its story and characters. And now that politically-correct projection has become a reality, at least as far as Memphis’ Orpheum theatre is concerned.

Earlier this month Orpheum management said it would no longer show Gone With The Wind as part of the Orpheum Movie Series due to complaints, presumably from African-American viewers and ultra-p.c. types. The theater’s board deemed the 1939 film “insensitive” after receiving “numerous comments” that stemmed from a screening on Friday, 8.11.17. The Clark Gable-Vivien Leigh film, once the most beloved Hollywood epic of all time, has been dropped from next year’s planned summer movie series. 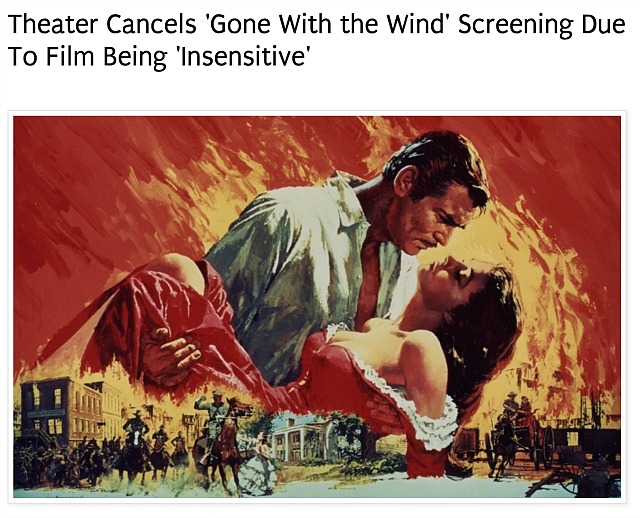 “While title selections for the series are typically made in the spring of each year, the Orpheum has made this determination early in response to specific inquiries from patrons,” per a statement from The Orpheum Theatre Group. “The Orpheum appreciates feedback on its programming from all members of the mid-south community. The recent screening of Gone With the Wind at the Orpheum generated numerous comments. As an organization whose stated mission is to ‘entertain, educate and enlighten the communities it serves,’ the Orpheum cannot show a film that is insensitive to a large segment of its local population.”

The racism in GWTW is “no longer tolerable in our current socio-political climate,” Lumenick argued. While noting that GWTW “isn’t as blatantly and virulently racist as D.W. Griffith’s Birth of a Nation, which was considered one of the greatest American movies as late as the early 1960s, but is now rarely screened, even in museums,” Lumenick suggested that GWTW “may one day disappear from the cultural conversation and suffer a permanent downgrade when it comes to estimating the all-time great films.”

August 26, 2017by Jeffrey Wells28 Comments
« Previous post
You Can’t Just Throw All That Out
Next post »
Hurricane Harvey FOMO