Once again, hats off to the marketing team behind Tom Ford‘s Nocturnal Animals (Focus Features, 11.18) for making this ambitiously conceived but mostly uninvolving psychological drama seem more intriguing than it is. The new trailer is flat-out masterful, and the mildly spooky one-sheet nails it also. I’m not sure if Focus used an outside agency or what, but this is the kind of sell-job that every distributor wants. 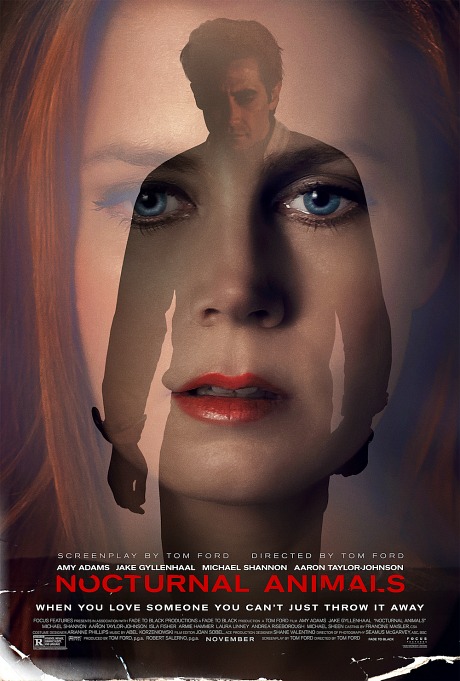 From my Toronto Film Festival review: “Speaking as a big fan of Ford’s A Single Man, writing this review gives me no pleasure. I’m heartbroken for all concerned, but this is an ambitious, serious-minded double-tracker — half 21st Century elite ennui, half “fictional” flashback — that scores in a fleeting, in-and-out fashion but mostly sinks into mud.

“Based on Austin Wright‘s “Tony and Susan,” Animals is mostly a glum critique of moneyed lifestyles and values. It’s also about different forms of cowardice. It’s enlivened in the fashion of a ’70s exploitation film (such as Wes Craven‘s The Hills Have Eyes) by a violent fictional side-story about a family being attacked in rural Texas by a trio of scumbags, but all this does is create an unwelcome odor.

“The only keeper in the whole thing is the always dependable Michael Shannon, who scores as a cancer-ridden Texas lawman who just wants to put the bad guys away and to hell with due process. No matter who or what he’s playing, Shannon always nails it.

“The film is basically about Susan (Amy Adams), a Los Angeles-based art gallery owner feeling drained by a failing marriage to a big-finance type (Armie Hammer), reading a manuscript of a forthcoming novel by her ex-husband Edward (Jake Gyllenhaal).

“The book’s story, a brutal, Death Wish-like tale of an attack upon a husband (also played by Gyllenhaal in the film’s enactment), wife (Isla Fisher) and daughter (Ellie Bamber) in the Texas back-country and the revenge that follows, puts Susan through the ringer and takes her back to the reasons she left Edward when he was a struggling book-store employee.

“I didn’t hate Nocturnal Animals. I’m fully aware that it’s an ambitious, experimental thing (certainly from a structural standpoint) but I never felt fully drawn in. It keeps you at a distance.

“The depiction of Adams’ life is appropriately somber if not morose, but there’s no energy to it. An occasional witty line or smart-ass character (i.e., Jenna Malone‘s) pops up, but this portion of the film (the slow pollution of the soul in the midst of great wealth) felt to me like a flatline thing. The early ’60s films of Michelangelo Antonioni still own this milieu.

“Animals is mostly about the Hills Have Eyes sub-section, but there’s very little satisfaction as Gyllenhaal’s within-the-book character, Tony Hastings, doesn’t exactly handle himself like Clint Eastwood or Vin Diesel. I don’t know what he could have done differently after the animals (led by Aaron-Taylor Johnson and Karl Glusman) strike, but he’s a wimp for the most part, and I generally don’t hold with candy-asses. Yes, a certain payback finally arrives but not in a way that I enjoyed or cared about.

“But at least this portion gives Shannon an opportunity to saunter along and hold the film hostage with his steely glare and deadpan humor.”