I’ve thought and thought about it, and there’s no way Rachel Weisz’s performance in The Constant Gardener isn’t at the very top of the Best Supporting Actress con- tender list.
Why? Because her portrayal of Tessa Quayle, the soul of this highly charged poli- tical thriller, burns the brightest from within. 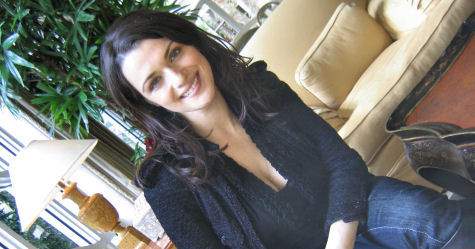 When we first meet her, Tessa is a deeply impassioned London leftie with her heart sewn into her shirt-sleeve. Too plainly. When she gets to Kenya with her diplomat husband Justin (Ralph Fiennes), her compassion for Africa’s poor and disdain for corporate malfeasance are so pronounced that she gets herself killed.
But in death, she awakens Justin’s heart. And in so doing we’re left with the notion that a person isn’t just about who and what they are as their life happens, and that we all linger in different ways by the measure of our family and friends.
< ?php include ('/home/hollyw9/public_html/wired'); ?>
Who’s been better this year? I’ve gone down the list and nobody’s really stood up to Weisz’s brush-fire of a performance.
The one who comes closet is Scarlett Johansson’s neurotic actress- without-a- rudder in Woody Allen’s Match Point. She has a tragic dimension, but one that stems from bad luck rather than a humanistic choice, which is what fells poor Tessa.
Shirley MacLaine’s In Her Shoes grandmother is perfect but restrained — a perfor- mance composed of precise little flicks of the wrist.
Diane Keaton in The Family Stone is sharp and lively with a hurting maternal thing going on, but it’s not what anyone would call a reach-for-the-stars, pull-out-the- stops performance. 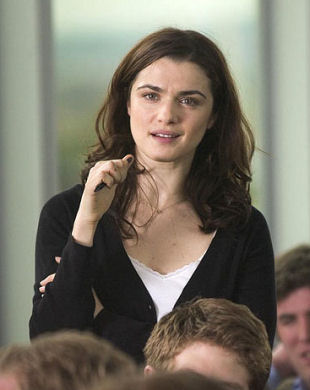 As Tessa Quayle in The Constant Gardener

Uma Thurman is ripe and vivacious in The Producers, but this sort of thing isn’t award-level…forget it.
Gong Li is obviously a feisty Bette Davis bitch in Memoirs of a Geisha…doing it as best she can. But she’s speaking English all through it, and she’s part of an astonishingly stupefying film.
Michelle Williams doesn’t have enough screen time or peak moments in Broke- back Mountain.
I met with Weisz yesterday (Thursday) for an intriguing 24 minutes in the Garden Room of the Peninsula Hotel, during which we talked about …well, four or five things. Briefly. Between digressions and jokes and ordering of salads and refusings of bread.
Topic A was the new wave of political movies that have been landing in theatres, about which Ben Svetkey wrote a very smart, on-top-of-it piece in last week’s Entertainment Weekly.
The notion is that 9/11, terrorism and the war in Iraq are triggering the same kind of uncertainties that led to the noirish paranoid wave of films in the ’70s like The Parallax View, All The President’s Men and Three Days of the Condor.
Signifying the current of today’s disquiet and anxiety are Syriana, Good Night and Good Luck, Lord of War and The Constant Gardener.
There’s also The Good Shepherd, a CIA historical drama due to open sometime in ’06 (I think), plus at least three 9.11 movies (Oliver Stone’s buried-under-the-rubble drama, Paul Greengrass’s Flight 93 real-time drama, and Mike Binder’s Reign Over Me, which will star Adam Sandler as a guy who can’t get over his wife and kids having been in one of the planes that slammed into the twin towers). 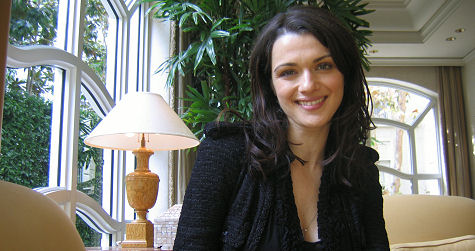 The big ogre in all these films, Weisz believes, are corporations — always behind the dirty work, always pushing for suppression of the truth, always with the sociopathic rationales.
We also spoke about her next film, The Fountain (Warner Bros.), in which she stars with Hugh Jackman. Directed and written by her husband…I’m sorry, her boyfriend Darren Aronofsky. It may make its first appearance at the Cannes Film Festival in May ’06, she said. Aronofsky has only recently finished cutting it.
Here’s a link to a recently-up Fountain teaser.
The IMDB log line says The Fountain is about three parallel stories spanning over a thousand years, all concerning love, death, spirituality and the fragility of our existence in this world.”
Fragility of existence? What isn’t fragile? What isn’t transitional and ethereal or on the brink of dying or extinction, or about to be shuttered or down-sized? I feel fra- gile as shit when I’m riding my bike down Wilshire Blvd. and some hyper twenty- something in a black Beemer is making an impulse turn and almost knocks me over.
I’ve had an up-and-down time with Weisz over the last five or six years. Mostly pleasurable, but with two or three detours.
I loved that sex scene she shared with Jude Law in Enemy at the Gates. It took me a while to forgive Weisz for starring in those two Mummy movies. But I eventually got past that and then fell for her in Neil LaBute’s The Shape of Things (the film, not the play). Then Weisz made Constantine and I got depressed and pissed all over again. Then she redeemed herself with The Constant Gardener .
If you’re an actor in the big-time, there’s no getting around having to make shitty expensive movies to pay the bills. I’m sorry for this but that’s life. 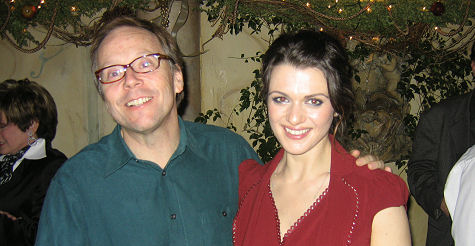 Weisz hit Los Angeles two days ago (Wednesday) and is now making the press rounds with her Constant Gardener director Fernando Meirelles. It’s 4:10 pm and I’m due to be at a party they’re going to attend at Il Cielo in less than an hour and I’m not even dressed.
There’s a lot more to say about Weisz, but just click on this sound file and you can hear 80% of the interview. I lost the last 20% due to shortage of memory… brilliant. Life isn’t just a daily spiritual and physical challenge, but a technological one.
I lightly danced around a question that you’re not supposed to bring up with actresses. Weisz is currently rail-thin and extremely model-pretty, which raises the fact that she looks somewhat different in Gardener due to a scrubbed-face look (i.e., no makeup) and the slight presence of chipmunk cheeks.
I knew it was a bad question to ask so I didn’t ask it — I wimped out and twinkle- toed my way through a non-question while managing to underline how good she looks now — and that was that and we said our goodbyes and yaddah-yaddah.
Weisz is one of the best we have right now, and she’s got a while to go before she hits 40 and starts having to scramble for the few good parts that are written each year for women of years, character and seasoning.
She told me that Aronofsky, like myself, hates the mentality behind the Jane Aus- ten books and has said to Rachel that “you couldn’t pay me” to see Pride and Prejudice. Well spoken, good man. 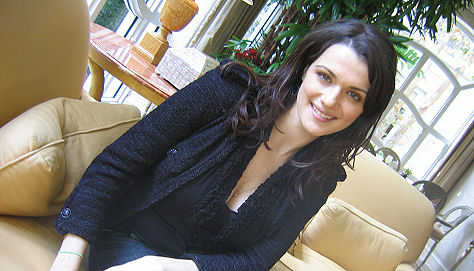 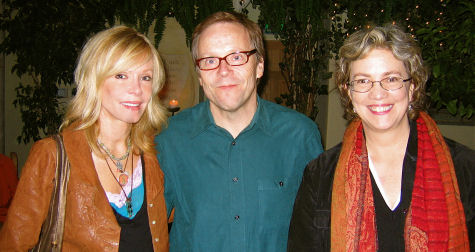 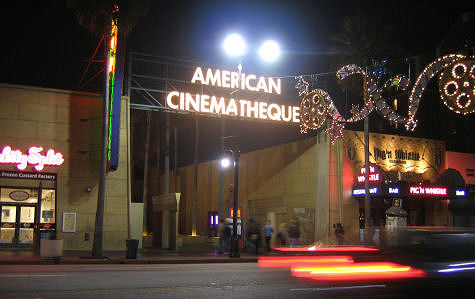 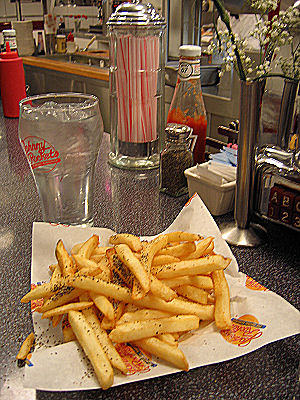 I’m feel I should be beating the drum more loudly for Woody Allen’s Match Point (DreamWorks, 12.28) because it’s not just his best in a long time, but one of the best of the year. And I need to stop being wimpy about this.
It really is Allen’s darkest and most precisely calibrated film since Crime and Misdemeanors…clean, cruel and ironic as hell. 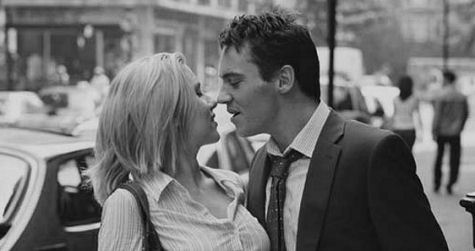 Any film worth its salt has to have thematic clarity. Match Point‘s theme is clear as a friggin’ bell, and with echoes of George Stevens’ A Place in the Sun and Fyodor Dostoevsky’s “Crime and Punishment,” and it boils down to this:
Be smart and vigilant in life, and maybe you’ll get what you want, or what you think you need. But if you want things to really turn out, be lucky.
People hate this notion because it means our lives are little silver balls whirling around a roulette wheel. Maybe we’ll plop into a red or black slot at the right time, or into an odd or even number at the wrong time…and maybe something amazing or comical or devastating will come of it. Life is cold, man.
If there wasn’t such a herd mentality in this town, if people weren’t so political and equivocal, Match Point could actually be in the mix for Best Picture.
It’s a slightly better film than Good Night, and Good Luck. It’s not as much of a sad and broken-hearted thing as Brokeback Mountain, but it has as much confidence and self-awareness as Walk the Line. And it’s a good five or ten times better than Memoirs of a Geisha. 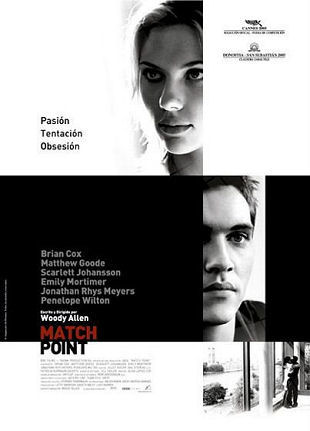 The Spanish one-sheet, which, if you ask me, has it all over the U.S. version

Let’s be really honest. I’m not ballsy enough to stand up for the Woody all alone, partly because deep down I’m only 90% supportive of Match Point (I have some problems with this and that aspect, but nothing humungous), but I feel bolder with Oscar prognosticators Pete Hammond, Sasha Stone and Eugene Hernandez listing it among their top five.
So I guess I’m like Bobby Kennedy after Eugene McCarthy got 42% of the vote in the 1968 New Hampshire primary against Lyndon Johnson. I’m going, “Uhh, okay …there’s something happening here and I’m joining the insurrectionists.”
Screw the herd mentality and the hell with political and equivocal. The more I think about Match Point, the better it seems. Woody’s easily a Best Original Screenplay contender, and…well, at least that.
I said last May at the Cannes Film Festival that Match Point isn’t quite as good as Woody’s Crimes and Misdemeanors, but it deals the same kind of cards and has its footing in more or less the same philosophical realm.
And I’ve said this three or four times, but the finale kills.
Set in present-day England (mostly London, Match Point is about a tennis instruc- tor namd Chris Wilton (Jonathan Rhys- Meyers) who relationships his way into an upper-crust English family by way of one of his male students, a cheerful smoothie named Tom Hewett (Matthew Goode). 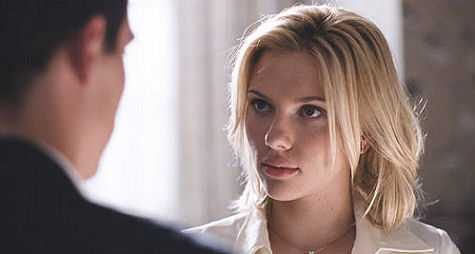 Chris is soon romancing and then marrying Tom’s sister Chloe (Emily Mortimer), but almost-as-quickly getting involved with Tom’s fiance, a struggling American actress named Nola Rice (Scarlett Johansson).
The story essentially turns on the matter of Nola becoming pregnant and insisting that Chris leave his wife for her, and how Chris deals with the pressure of this.
Rhys-Meyers handles his part skillfully and with exactly the right balance between terrible, gut-wrenching guilt and the suggestion of a sociopathic undercurrent. But it’s Johansson, far and away, who gives the finest performance. She seems in possession of a fierce, almost Brando-esque naturalism here. She grabs Allen’s dialogue by the shirt collar and slaps it around.
Match Point feels a bit pat from time to time. The talk feels a little too polite here and there, and certain aspects of the plot feel a bit forced. But that’s Woody these days, and in this instance, in this realm, that’s pretty damn good.

December 2, 2005by Jeffrey WellsNo Comments
« Previous post
King Kong — the brute
Next post »
Here is one of the