There is nothing in Olivier Dahan‘s Grace of Monaco, a precious, rarified tale of French political maneuver and regal appearances, that persuades or reaches out in a dramatic sense or which resembles “life” as most of us know it. It may as well be taking place on the ice planet of Hoth. It’s basically about a socially isolated prisoner, the former Grace Kelly (Nicole Kidman) who became Princess Grace of Monaco when she married Prince Rainer (Tim Roth) in April 1956, chafing against the restrictions of her marriage and title and mulling a return to the screen as the star of Alfred Hitchcock‘s Marnie. (Fate spared her that embarassment.) Right away I was muttering to myself “who cares?” I was chafing against the restrictions that came with watching this film, I can tell you. The word that best applies is “mediocre.” Grace of Monaco is essentially a TNT movie aimed at older women who remember Grace’s car-crash death in ’82 (as traumatic in its time to Princess Di‘s passing in ’97) and who revere the notion of marrying into royalty and all that. I couldn’t have felt less involved. This is one of those movies that you do your best to sit through. 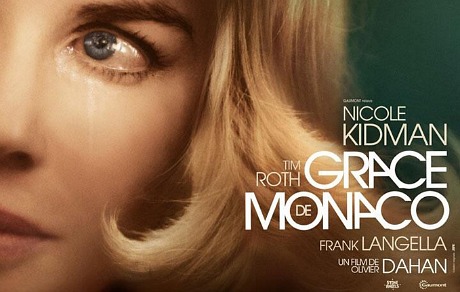 The most arresting sequence, for me, is one in which Kidman/Kelly is shown racing her sports car around winding hairpin turns in the hills above Monte Carlo. On one level it foreshadows the circumstances of Grace’s actual demise in the same area, but it’s shot and cut to closely resemble a similar scene in To Catch a Thief with Kelly driving and Cary Grant riding shotgun. Not a profound moment but nicely done all the same.

For whatever reason Grace of Monaco indulges in historical inaccuracy with cavalier disregard. Dahan has said more or less that several details are fudged or invented and that the film is “cinema” and not a biopic. But what could be the point of making a film about a real-life person and yet getting the particulars “wrong” in dozens of different ways? Why make this kind of film if you’re this indifferent to replicating a bygone reality that can be easily checked? What’s the upside of this strategy?

Grace begins with a sound-stage filming of the afore-mentioned driving in the hills scene in To Catch A Thief, which was shot in ’54 and released in August of 1955. And yet the film says this is happening in 1956. Why? The guy playing “Cary Grant” in this scene is wearing a hat, which never happened. Grace was a blonde, of course, and yet Kidman’s hair is straight ginger. (Kidman is sitting in front of me right now at the Grace of Monaco press conference, and her hair is Kelly blonde.) One of the biggest blockages, for me, is that both Kidman and Roth seem too old for their roles. Kelly was 32 and 33 during the time period of the film (’61 and’62) and Kidman, soon to turn 47, was around 45 during filming. Rainer (or “Ray” as he’s called in the film) was just shy of 40 in the early 60s while Roth is in his mid ’50s. Why use actual black-and-white footage of the 1956 marriage ceremony between Kelly and Rainer when it obviously doesn’t match the film’s illusion? Why show Rainer slugging a French diplomat and breaking wine glasses in mixed company when it’s 99% certain this never happened? I could go on and on, but let’s forget it.

Kidman plays Kelly with chilly stares, for the most part. In scene after scene she seems overly poised and remote and clenched. Her manner and acting style reminded me of Christina Hendricks‘ Joan character in Mad Men. Roth doesn’t look remotely like Rainer, as previously noted, but his performance isn’t as bothersome as I had anticipated based on the Grace of Monaco trailers. Frank Langella fares reasonably well as Father Tucker, a confidante of Grace’s during her periods of insecurity and anxiety, but he mostly seems to be phoning it in. I love Scott Foundas’s line about Langella being “in Jiminy Cricket mode.”