No question about it: the 45-minute Chicago finale of Transformers 3: Dark of the Moon (Paramount, now playing) is absolutely jump-off-a-skyscraper insane. It’s astonishing, exhilarating, relentless, pulverizing…and yes, finally exhausting. Even if you’re a confirmed Michael Bay hater you have to give the guy credit for shooting this stunningly energized and visually giddy CG symphony of madness out of a shotgun and right through your 3D glasses. And none of it amounts to anything more than motion and chaos and fury designed entirely to sell tickets.

I didn’t even see the extra-bright Platinum version (which I’m going to try and see later today) and my mouth was hanging open. I’ve never seen a battle scene that went on this long and with this level of sustained blow-it-to-pieces energy, and in 3D yet…it’s furious, crazybeautiful and a little diseased. And stupefyingly superficial. No thought whatsoever has been put into this film other than Bay saying to his crew, “Push it, faster, crazier …c’mon!” He’s delivering levels of destruction to downtown Chicago that are like 100 9/11 attacks rolled into one. (His cameras naturally ignore the hundreds if not thousands of civilian deaths that would inevitably result from this level of mayhem.) Either way the Chicago finale is one for the books and surely worth the price in itself.

What does the sequence mean? Nothing. It means that Bay had the money to shoot it. What does it tell us about ourselves? That we’re a shallow culture that enjoys seeing shit destroyed and blown up and shattered and splattered all to hell. What emotions does it arouse? None, unless you consider Magic Mountain-level excitement to be an emotion.

That said, some observations and complaints:

(a) The 155-minute Transformers 3 is basically two movies — 100 to 110 minutes of set-up, dialogue, character conflict, action-fortified exposition and blah-dee-blah, much of which is too busy or emphatic and in any case plowed right through me (or around me or over-my-head or whatever) without sticking to my brain or my ribs, and then the 45-minute Chicago payoff. I didn’t care about the first 110 minutes. The movie should have been shorter. 60 or 70 minutes to cover Part One plus Chicago, which would be 105 to 115 minutes, tops. 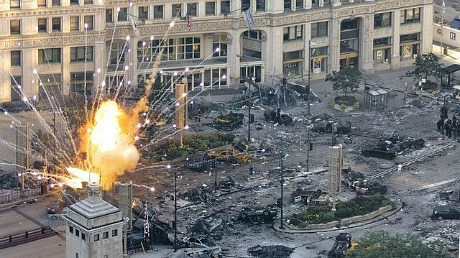 (b) The dialogue for the various Autobots and Decepticons has always been dreadful; ditto the voice-acting of this. The movie stops dead with every line these guys say to humans and to each other.

(c) John Turturro gives the best supporting performance. That is to say, he seems to be genuinely enjoying himself as opposed to just collecting a paycheck.

(d) Rosie Huntington-Whiteley (i.e., Megan Fox‘s replacement) is relatively okay, but she wears tall heels all through the film. Running like hell and climbing and falling down the side of a teetering glass building and scrambling for dear life over rock and rubble…in heels! Bay production assistant: “Michael, I know you like actresses to wear heels but c’mon, this is absurd, man…having Rosie wear heels through all this actionis like making her wear a formal gown with a diamond tiara. Why not make her wear a bikini while you’re at it?” Bay: “You wanna get fired? I like her in heels, she’s an incredibly hot ass-babe and she’s not wearing footwear that doesn’t look hot…end of discussion.”

(e) On top of which Huntington-Whiteley towers over Shia LaBeouf with her big heels on, and that…oh, that’s right, I’m not supposed to say that women standing taller than their boyfriends doesn’t work as well as being the same height or being slightly shorter. 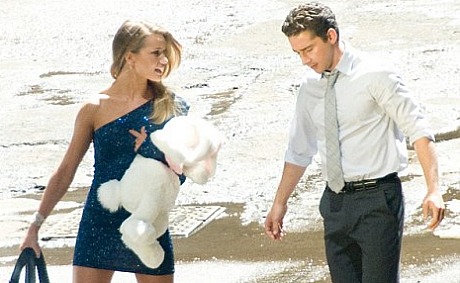