There isn’t much time with the Dardennes brothers‘ The Kid With The Bike starting at 7:30 (i.e., 85 minutes from now) but the absolute best film I’ve seen at the 2011 Cannes Film Festival is a somewhat chilly, jewel-precise study of an Austrian child molester. Markus Schleinzer‘s Michael (pronounced “miKAYel”) isn’t “pleasant” to watch, but it’s briliiant — emotionally suppressed in a correct way that blends with the protagonist, aesthetically disciplined and close to spellbinding.

Because the titular character, a 30something office worker (Michael Fuith) is an absolute fiend and because the film acquaints the audience with the behavior and mentality of a child molester in ways that are up-close uncomfortable, a fair-sized portion of the crowd in the Lumiere theatre was booing when it ended. Those were the chumps in the cheap seats — the moralists. The people who know from film and especially a powerhouse flick when they see one were clapping, of course.

Michael is easily the most gripping and cunning film I’ve seen here. It operates way above and beyond the raw brushstrokes and the imprecise, at times florid manner of Lynne Ramsay‘s over-praised We Need To Talk About Kevin. Don’t even talk about Ramsey’s film at this stage.

The story is basically about how and when Michael’s evil behavior will reach out and take him down. That’s where the story tension is, and why it holds you in its grip. This guy is going to suffer some payback sooner or later. You can sense that early on.

A milquetoast fellow in nearly every respect, Michael has a regular dull office job where he’s liked (from a certain distance) and respected. But in his modest home he keeps a young blonde boy (David Rauchenberger) prisoner in a basement room and uses him on occasion. The film never pushes your face in the ugliness of this crime, but it let’s you know exactly what’s going on. And every person whom Michael knows at the office and those in his grown-up family…nobody knows who and what he is. He’s very careful, of course. Fastidious, cautious.

That’s all I have time to say except that Michael, so far, is it for me — the cream of the crop. 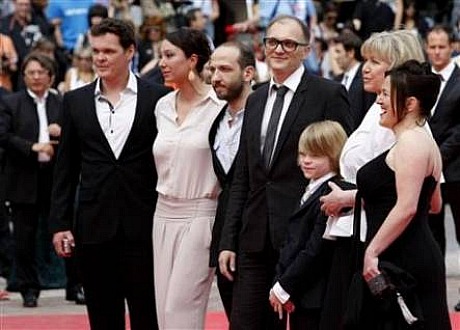