Jean Pierre and Luc Dardenne‘s The Kid With The Bike, which I saw early Saturday evening, is being reflexively praised here and there because (a) it’s a low-key but entirely competent teenaged kid-desperate-for-paternal-support film, but (b) mainly because the Dardennes are highly respected big wheels within the Cannes journalistic community. 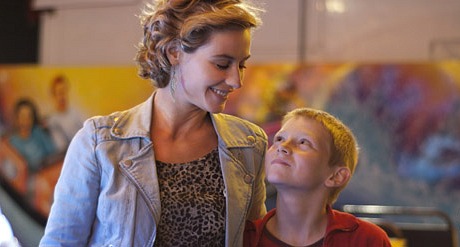 If The Kid With The Bike had been made by an unknown younger director and shown under Un Certain Regard or Semaine des Critiques, positive reviews would result — it’s an honest, well-made film — but it wouldn’t cause much of a stir.

Believe me, The Kid With The Bike is nothing to do mad cartwheels over. Yes, the Dardennes are first-rate scenarists and straight shooters; they know exactly what they’re doing every time. And their film ends well. But Cannes critics are, I feel, kneeling forward and kissing the proverbial ring. There’s nothing wrong with that in a general sense as long as there’s perspective.

Yes, I took an instant dislike to Thomas Doret, the red-haired lead character called Cyrill, when I first saw the trailer. This feeling deepened when I saw the film. I disliked his obstinate-woodpecker personality and the dogged, loon-like tone in his voice. If I ran into a kid like this in real life I would excuse myself fairly quickly, you bet.

Honestly? While the decision of his youngish kitchen-chef dad to abandon Cyrill and go his own way because he has very little money is reprehensible and pathetic, on a certain level I sympathized. Some men are just weak or selfish or naturally un-gifted at parenting (like my own dad), and some kids are just irksome. My heart goes out to any kid dealing with parental neglect and/or abuse, but on the other hand life is hard and sometimes cruel. Some of us are dealt shitty cards, but we have to play them as best we can.

Cyrill, it’s clear, is emotionally damaged and heading for some kind of downward swirl, perhaps into crime or becoming an abuser on his own. So on one level it’s admirable when a kind-hearted, fair-minded hairdresser named Samantha (Cecile de France) agrees to become Cyrill’s weekend care-giver, but on another level it’s a bit…puzzling?

She’s expressing a standard maternal instinct, but I found it curious that a youngish, attractive woman’s life would be so otherwise bereft of passion and commitment that she would leap into this kind of relationship. And I found her willingness to suddenly dump her somewhat selfish-minded, not-especially-bright boyfriend when he says “it’s him or me” too abrupt.

I felt that the whole film was a bit too simplistic and on-the-nose. I went with it, but I also felt that I was being fed a plate of honest but under-cooked contrivances by a couple of talented but (this time around) under-inspired chefs.