I had a half-hour chat last Tuesday evening with Me and Orson Welles star Christian McKay, and despite enjoying our time and really liking the guy — he’s spirited and razor-sharp and full of buoyancy — I waited five days to post. I don’t know why and I’m sorry. It doesn’t indicate anything. I just fell into a lazy pocket. 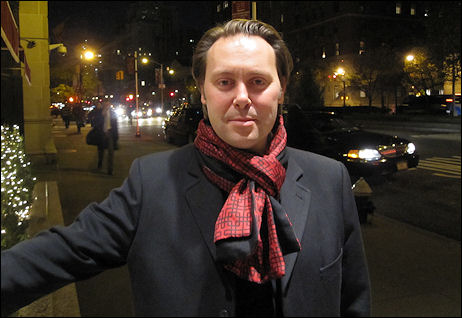 Me and Orson Wells star Christian McKay outside the Regency hotel just before we said out farewells — Tuesday, 11.24, 5:20 pm.

Actually, that’s not true. I was reluctant to get into a McKay thing because as gifted as he seems to be — he’s actually brilliant in MAOW — he’s in his mid 30s now and only just starting to happen, and I knew I’d have to answer what he’s been doing all this time and why he wasn’t on the stick in his early 20s. The answer, he says, is that he was into music when he was younger. The other answer, I suspect, is that, like myself, he was simply a late bloomer.

Whatever — the guy is a British dynamo with one of those “God, I love acting!…I mean, I love being paid attention to!” personalities. He looks like Orson Welles, of course, but he’s obviously himself as well, and after sitting with him for 20 or so minutes and then talking a bit more under a hotel awning out on Park Avenue it seemed obvious that he’s really and truly got it. Which means some combination of heat, hunger, talent, ambition, chutzpah and whatever else. Oh, and McKay smokes cigarettes. And he’s had a battle or two with the bathroom scale.

As I wrote a few days ago, Me and Orson Welles “is absolutely worth seeing for Christian McKay’s thunderbolt performance as the 22 year-old Welles — a headstrong genius in his hormonal-visionary cups. Vincent Donofrio was a fine Welles in Ed Wood (although someone else voiced the dialogue) and Liev Schreiber delivered a reasonably full-bodied Welles in RKO 281, but McKay — 34 or 35 when the film was shot, and looking like he could be 28 or 29 — is the Fo. He’s the standard-bearer and the king of the hill, the guy to beat the next time somebody plays Welles.”

And N.Y. Times critic A.O. Scott wrote that the film contains “the ego and the brilliance [of Orson Welles]..in full blossom. They are captured, with a brio and wit that puts most biopic mummery to shame, by Christian McKay, a British actor with a slender resume and superhuman confidence. His evident relish in the dimensions of this role is a crucial part of the performance. It’s so much fun to play Orson Welles because it must have been at least as much fun to be Orson Welles.” 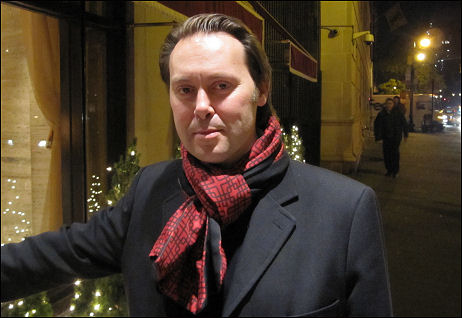 Since MAOW McKay has performed a small part in Woody Allen‘s next film (i.e., the one shot last summer in London) and a character named Hamilton McMillan in Bernard Rose‘s Mr. Nice.

He was on his way to do a Charlie Rose taping (along with director Richard Linklater and costars Zac Efron and Claire Danes) following our chat, but I’ve searched and searched and can’t find the segment on the Rose site or anywhere else. It doesn’t exist! I also asked the publicist when it’ll air…zip.