Grifter, Liar, Con Artist — What Else Is New?

Donald Trump is a lying, raging sociopath and the boss of a New York crime family who’s been using the Presidency to enrich himself and his corrupt buccaneer pallies. We all know this, no? So learning from the New York Times that Trump paid $750 in federal income taxes in 2016, and again in 2017 during his first year in the White House — $1500 total — is not what most of us would call a huge shocker. It fits a well-known pattern, is all. He’s a shyster and a grifter.

So when your average downmarket Trump loyalist reads that Trump paid a grand total of $1500 in taxes in 2016 and ’17, is he going to say “so Donald’s a big swaggering billionaire and he paid a lot less to the government than I did in those same years??…wow, amazing! I wish I could get away with paying $750 to the IRS!” Or will he say, “Okay, so he’s obviously a charlatan and a grifter, but at least he’s protecting us from Black Lives Matter and that’s all that matters.”

The 9.27 Times report, prepared by Russ Buettner, Susanne Craig and Mike McIntire, says Trump “paid no income taxes at all in 10 of the previous 15 years, largely because he reported losing much more money than he made. 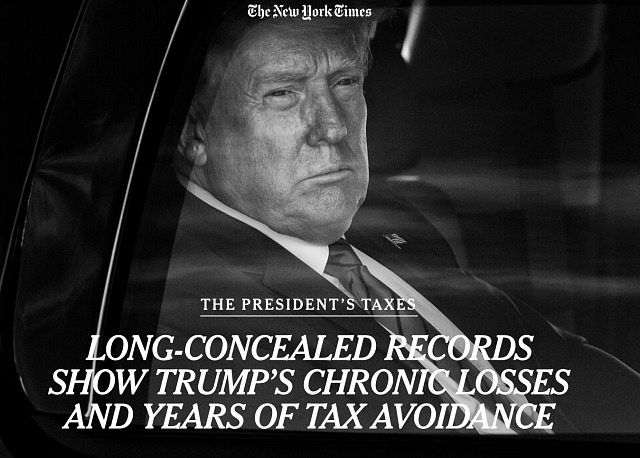 Excerpt: “As the president wages a re-election campaign that polls say he is in danger of losing, his finances are under stress, beset by losses and hundreds of millions of dollars in debt coming due that he has personally guaranteed. Also hanging over him is a decade-long audit battle with the Internal Revenue Service over the legitimacy of a $72.9 million tax refund that he claimed, and received, after declaring huge losses. An adverse ruling could cost him more than $100 million.

“The tax returns that Mr. Trump has long fought to keep private tell a story fundamentally different from the one he has sold to the American public. His reports to the I.R.S. portray a businessman who takes in hundreds of millions of dollars a year yet racks up chronic losses that he aggressively employs to avoid paying taxes. Now, with his financial challenges mounting, the records show that he depends more and more on making money from businesses that put him in potential and often direct conflict of interest with his job as president.”

Trump has naturally called the Times report “fake news.” What’s he gonna say, that they have him dead to rights?

Key paragraphs: “The Apprentice, along with the licensing and endorsement deals that flowed from his expanding celebrity, brought Mr. Trump a total of $427.4 million, The Times’s analysis of the records found. He invested much of that in a collection of businesses, mostly golf courses, that in the years since have steadily devoured cash — much as the money he secretly received from his father financed a spree of quixotic overspending that led to his collapse in the early 1990s.

“Indeed, his financial condition when he announced his run for president in 2015 lends some credence to the notion that his long-shot campaign was at least in part a gambit to reanimate the marketability of his name.” 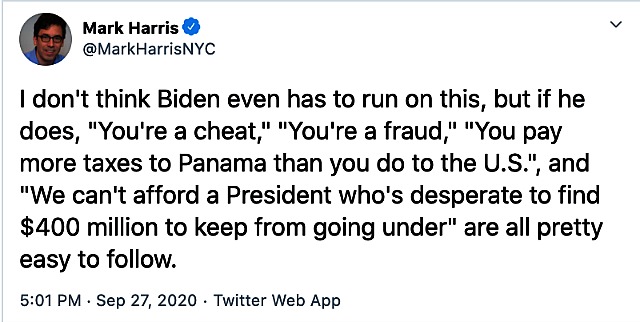