I came upon this 1950s cereal-box promotion for Guy Madison‘s Wild Bill Hickock character, and I thought to myself, “That poor guy…couldn’t act a lick but he got a 20-year career out of being hunky.” Who qualifies on this level today? Guys of ambivalent persuasion who can’t act to save their lives but are doing pretty well by virtue of their genes and will probably lead relatively comfortable lives. Or have we reached a point where hunkiness doesn’t last like it used to? 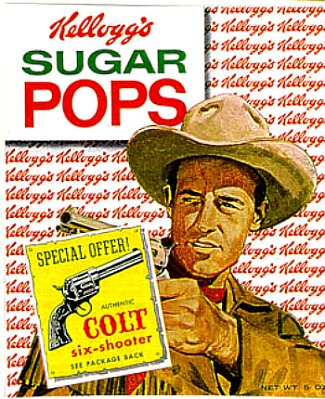 “In 1944, while visiting Hollywood on leave from the Coast Guard, Madison’s boyish good looks were spotted by a talent scout from David O. Selznick‘s office and he was immediately cast in a bit part in Selznick’s Since You Went Away. Following the film’s release in 1944, the studio received thousands of letters from fans wanting to know more about him.

“He was signed by RKO Pictures in 1946 and began appearing in romantic comedies and dramas but his wooden acting style hurt his chances of advancing in films. In 1951, television came to the rescue of his faltering career when he was cast in The Adventures of Wild Bill Hickok, which ran for six years.

Madison died of emphysema in 1996 (most likely due to smoking), and is buried in Forest Lawn cemetery in Cathedral City.