Tonight the first wave of the Black Panther faithful will swarm into megaplexes in every state of the union and ignite a seismic moment in Hollywood history. It’s not just the $150 million that Ryan Coogler‘s film is expected to earn by Sunday night but also the representation factor — an almost-all-black cast (two middle-aged male white guys are included), power-punch superhero flick that screams “now,” empowerment, authority, 21st Century change and tribal fervor like no Hollywood film ever before.

Just keep in mind what I said a couple of weeks ago, which is that Black Panther feels a little directionless at first — the term is “less than fully satisfying” — and that it doesn’t really kick into gear until the final 60 minutes.

And keep in mind what Movie Nation‘s Roger Moore said the other day:

“Marvel marvels aren’t so much scripted and directed as focus-grouped and engineered. The story beats, hero or heroine hurdles and fights and effects are so familiar as to be budgeted down to the penny. Broadening the appeal of your franchise ethnically is just smart business. In story terms, in character inclusions, in casting, pandering pays. You’d expect no less from Disney.

“So you’ve got another cool costumed hero tested with dead daddy issues, another ‘sibling’ (or close relative) rivalry, another hidden world where superhuman heroes lay low.

“[Black Panther] has the attempted gravitas of Logan, the myth-building of Wonder Woman and the same pacing problems as those two consequential, worthwhile and only occasionally fun additions to the genre.

“This Panther is awfully slow on the prowl. The two hours and fourteen minutes just amble by. There’s little urgency to any of this, even the finale. It’s just passable entertainment, a noble attempt at waxing mythical that never, for one second, delivers that out-of-body giddiness that makes popcorn pictures of its ilk burst to life.” 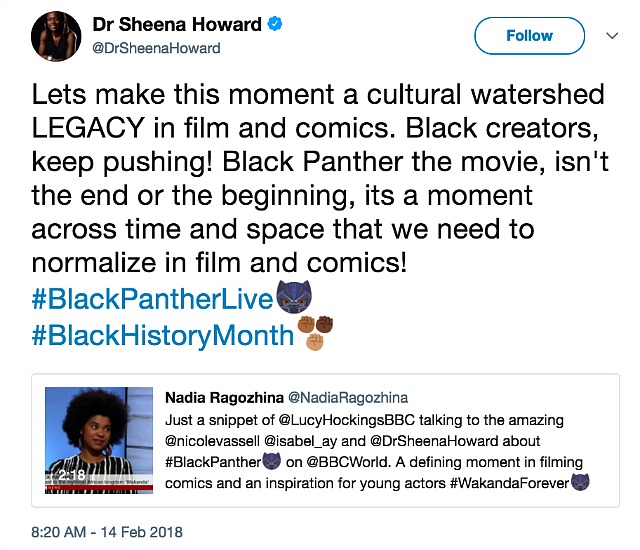