Hammond on the Globes

“If we are to believe that the Golden Globe nominations will have a direct effect on Academy (and Guild) voting patterns, then it must be said pictures like World Trade Center, The Good German, The Good Shepherd, Children Of Men, The Prestige, The Illusionist and The Painted Veil…have been voted off the island,” writes Hollywood Wiretap‘s Pete Hammond in his just-up Globe nom reaction piece. 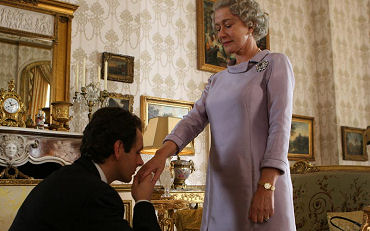 “Annette Bening, an early favorite would seem to be a dark horse now despite a Globe comedy nomination. Will Smith is the only thing keeping the high hopes of Pursuit of Happyness. Peter O√É¬¢√¢‚Äö¬¨√¢‚Äû¬¢Toole, the sentimental favorite is now an underdog to emerging front-runner Forest Whitaker. In fact, Whitaker√É¬¢√¢‚Äö¬¨√¢‚Äû¬¢s Last King and Helen Mirren√É¬¢√¢‚Äö¬¨√¢‚Äû¬¢s Queen look like good bets to become Oscar royalty as well and have pretty much run the board proving critics, like Academy voters, are duly impressed when actors play well-known real life figures.
“In the battle of the 9/11 films, World Trade Center was dissed while Universal has steered United 93 into position with significant notice from N.Y., D.C., L.A. and S.F. critics groups, a mention on the AFI list and a BFCA nom but the lack of Globe nominations might be troubling in going forward to Oscar. United 93 boosters should take heart from The Thin Red Line which was completely shut out in the Globes but went on to 7 Oscar noms including Best Picture in 1998.
“But will the many reluctant Academy members who have resisted popping their screeners into their DVD players feel they have to watch now? The jury is out but at least one member told us that while he has given it some renewed thought he still has no interest in seeing the movie, critical acclaim or not.”