Bob Dylan is reportedly concerned that George Hickenlooper‘s Factory Girl suggests that he was responsible for Edie Sedgwick‘s suicide, which, as far as the film is concerned, is horseshit. (That is, if the version that the Weinstein Co. is opening in early February bears any relation to the cut I saw last August.) The legendary singer-songwriter has told attorneys to go after producers Bob Yari and Holly Wiersma in order to ensure that he has a chance to see the film and assess the content before it’s shown any further. 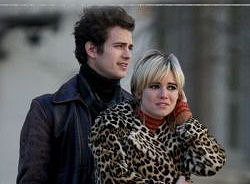 Dylan’s lawyer Orin Snyder is demanding that the film’s theatrical release plans be halted and even for critics screening to cease “until [Snyder] and Dylan can see it to determine if Dylan, who they say has ‘deep concerns,’ has been defamed,” according to a 12.14 “Page Six” item.
HE to Dylan: You’re worrying about next to nothing. In the version of Factory Girl I saw, the “Danny Quinn” character (Hayden Christensen) is obviously you through and through — same hair, same speech patterns, a brown suede (or leather) jacket that strongly resembles the one you wore on the cover of Blonde on Blonde…the whole shot. And yes, Quinn has an affair or close alliance of some kind with Edie Sedgwick (Sienna Miller). And yes, when he disappears out of her life she gets upset and starts to fall apart. But she’s mostly frazzled because Andy Warhol (Guy Pearce) has thrown her over for Nico, i.e., the model and Velvet Underground singer.
Here’s the thing: before “Danny” bids farewell, he warns Sedgwick that she’s being used by Warhol and that he’s not a friend, and that she should get back to her love of sculpture and invest in herself rather than just hang with Warhol’s Factory crowd, whom he regards as a band of cutthroat scenesters and poseurs. In short, you come off as a fairly compassionate and tender friend of Sedg- wick’s, and hardly the cause of her suicide, which happened a good four or five years after the mid ’60s New York period depicted in the film. 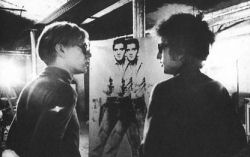 The letter sent to Yari and Wersma reportedly says, “You appear to be laboring under the misunderstanding that merely changing the name of a character or making him a purported fictional composite will immunize you from suit. That is not so. Even though Mr. Dylan’s name is not used, the portrayal remains both defamatory and a violation of Mr. Dylan’s right of publicity…Until we are given an opportunity to view the film, we hereby demand that all distribution and screenings …immediately be ceased.”
Snyder reportedly also contacted Factory Girl screenwriter Aaron Richard Golub. Hey, what about co-screenwriter Captain Mauzner? Doesn’t he rate a threatening letter also? And what about Hickenlooper and Harvey Weinstein? Everybody must get stoned.