I love that our Secretary of State is the kind of person who doesn’t sit impassively but reacts emotionally when she sees, feels or senses violent activity. I mean, you can tell from Hillary Clinton‘s hand-over-mouth gesture that something hairy was going on when this photo was snapped during the White House national security team’s “live-time” witnessing of Sunday’s attack upon Osama Bin Laden‘s Pakistan compound. 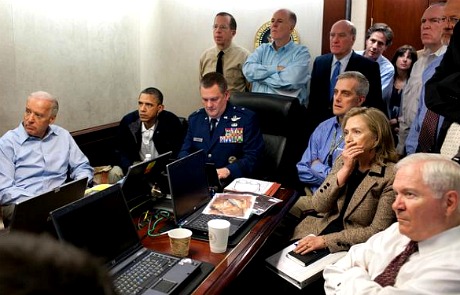 Hillary, in short, reacted like an average cultivated woman with a normal civilized aversion to violence. And that’s cool. I want a person who’s somewhat appalled by violence representing this country’s interests in diplomatic realms, and not some frosty Dick Cheney-like macho prick. Notice how none of the guys in the room are batting an eye. Joe Biden could be looking at a football game. President Obama is apparently reacting in some clenched way to what he’s watching or hearing, but he’s keeping his cool.

I have one observation. Remember how Hillary presented herself during the ’08 primary campaign again Senator Obama? As the governmentally experienced tough-ass who could handle scary foreign-policy problems at 3 am, and hinting that the inexperienced Obama might not be as cool, calm and collected as she when push comes to diplomatic shove?