All large-format films of the ’50s and early ’60s (70 mm, VistaVision, Technirama, etc.) need to be remastered for Bluray, so I have no argument against Warner Home Video scheduling a Bluray of Nicholas Ray‘s (’61) King of Kings on 3.29.11. It was shot in Technirama by Manuel Berenguer, Milton R. Krasner and Franz Planer, and “presented in 70mm Super Technirama at selected first-run engagements,” according to the film’s Wiki page. So the detail should be quite nice. 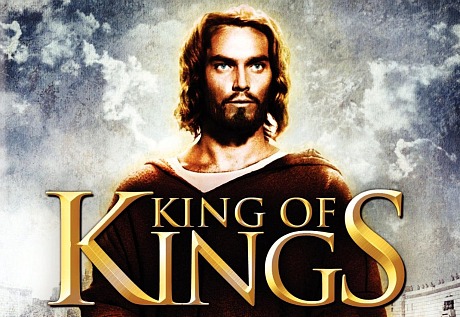 But why? Or rather, why not first put out a much better large-format Biblical-era film that would be more appreciated — i.e., William Wyler ‘s Ben-Hur (59)? King of Kings is a visually handsome thing with certain attributes, but as I wrote in ’08, “so much of this 1961 Samuel Bronston epic is either pompous or tedious, and some of it is painful.”

Example: “The casting of the 37 year-old Siobhan McKenna (37 going on 52) as Mary, mother of Jesus, is ludicrous — a solemn earthy Irish woman straight out of Sean O’Casey and James Joyce with her lined face, alabaster Irish complexion and faintly suppressed Dublin accent.

“There are nonetheless five worthwhile things about this film: (a) Miklos Rosza ‘s score, particularly the overture; (b) Ron Randell‘s fine performance as Lucius, the thoughtful, morally conflicted Centurion; (b) Jeffrey Hunter‘s lead performance during the last third; (d) the shots that show perfect focus in both the foreground and background (which was pretty amazing during a time in which films would commonly rack focus to catch the foreground or background, but never both); and (e) Ray Bradbury‘s eloquently-written narration.

“Rosza sometimes let his costume-epic scores become slightly over-heated, but when orgiastic, big-screen, reach-for-the-heavens emotion was called for, no one did it better. He may have been first and foremost a craftsman, but Rosza really had soul.

“Listen to the overture and main title music of King of Kings, and all kinds of haunting associations and recollections about the life of Yeshua and his New Testament teachings (or at the least, grandiose Hollywood movies about same) start swirling around in your head. And then watch that Nicholas Ray’s stiff, strangely constipated film (which Rosza described in his autobiography as ‘nonsensical Biblical ghoulash’) and it’s obvious that Rosza came closer to capturing the spiritual essence of Christ’s story better than anyone else on the team (Ray, screenwriter Phillip Yordan, producer Samuel Bronston).” 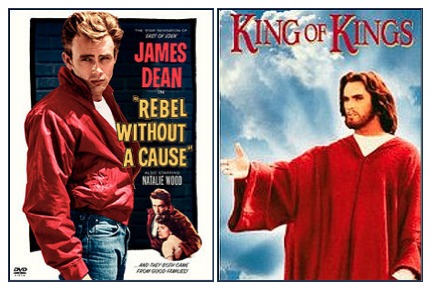 Here’s another piece I did about Ray’s apparent interest in having his male leads wear red garments with white T-shirts.

“A clash between the Ray, Bronston and Yordan seems to have left the film in a mess. At the last minute Ray was told to include the Jewish rebellion action scene three-quarters of the way through the film, and an extra character called David (played by Richard Johnston), was brought in to play a similar role to the finished film’s Judas.

“By then the film was 3 1/2 hours long, and although Ray thought that was necessary, Margaret Booth (head of the editing department) decided to cut out ‘David’ altogether. This resulted in one scene between Barabbas and ‘David’ having to be re-filmed with Judas instead. As a result of these major, last minute changes, any sense of continuity was destroyed, as was the long standing friendship between Ray and Yordan.

“To make things worse, once Ray had left the project, his final scene of Jesus leaving the disciples on a mountain was replaced by the now infamous ‘giant-Jesus making a cross on the beach‘ shot. Worse still, Jeffrey Hunter’s dialogue was re-dubbed in its entirety so that he would have a lower, more serious, voice.

“Given all this internal wrangling, it is hardly surprising that the film falls short of it’s potential. It never really seems to know what kind of film it is. Is it a Roman action epic, or an introspective look at a rebel with a cause?”