Sunday night will be my first married New Year’s Eve since…Jesus, since ’90. My inclination has always been to stay the hell away from New Year’s Eve celebrations unless, you know, I’ve been invited to a private soiree of some kind, and even then I’m not without reluctance.

From a 12.30.16 piece called “Rookie Revelers”, which conveyed the same thing I say every year: “New Year’s Eve is commonly known among service industry types as ‘amateur night.’ Meaning that people who don’t go out or even drink much are suddenly out on the town, and for the most part spreading the noxious atmosphere of forced gaiety. 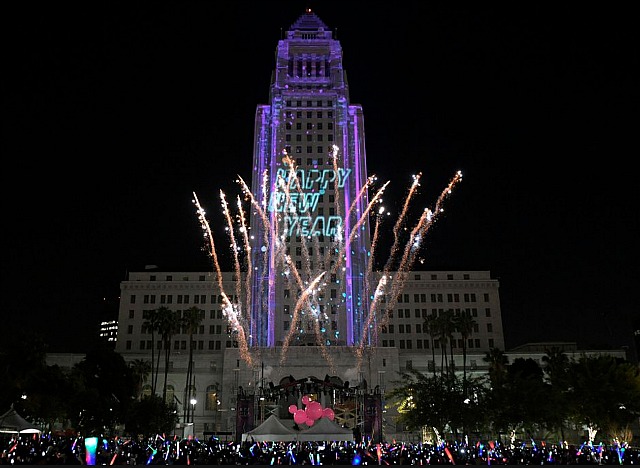 “People of character do one of three things on New Year’s Eve: (a) attend a smallish party with friends or hit a nice restaurant — anything but a loud, noisy gathering of any kind; (b) find some secluded spot with a great view of a big city or valley and just settle into the idea of watching distant fireworks and listening to the sounds of far-off honking and whoo-whooing; and/or (c) hit the hay by 1 or 1:30 am, tops.”

Filmmaker friend: Happy new year, man! And many cinematic feasts to come!
HE: Back at you…cheers! Are you a quiet, stay-home-by-the-fire guy on New Year’s Eve, sipping a cup of tea and maybe reading or watching a film? You just don’t seem like a party animal type. I’m sure not.
Filmmaker friend: I am in Mexico, travelling through small rural communities, really. I will be with the kids and my high school pal on New Year’s Eve, and will probably call [a pair of filmmaking friends] and that’s the night!
HE: Sounds good. Auld acquaintance.
Filmmaker friend: I am quite a hermit. Always have been.