Harold Ramis, the director and co-writer of Groundhog Day, one of the greatest, funniest and most profoundly spiritual, philosophically robust comedies ever made, has left the earth at age 69. Everything that Ramis did from his birth on 11.21.44 until be began to develop and prepare for Groundhog Day was Phase One, and everything that came after Groundhog Day was Phase Two. Ramis never did anything better than make Groundhog Day, and he didn’t need to. His life was fulfilled by this 1993 film. Really. And not everyone realized this right away. I did but a lot of people didn’t.

Groundhog Day is the Zen-all and Be-all. It’s the ultimate Journey of Life movie. It is Buddhist, Taoist, Christian, Hindu, Reincarnate, Episcopalian, Hassidic, Catholic…it is everything. You have to keep doing it and doing it and doing it until you finally get it right, man…simple as that.

How long is Bill Murray‘s Phil Connors stuck living the same day over and over again? I always figured it was a couple of months, or possibly three or four. Ramis stated in the Groudhog Day DVD/Bluray commentary that he believes that 10 years pass. In a followup e-mail sent to Heeb magazine, Ramis said he thought that the 10-year estimate was “too short…it takes at least 10 years to get good at anything, and allotting for the down time and misguided years he spent, it had to be more like 30 or 40 years.”

Shame on Entertaiment Weekly‘s Owen Gleiberman for giving Groundhog Day a B-minus, and on Roger Ebert for also being slow to realize how good it was/is. Washington Post critic Desson Howe said that “while the film is a good Bill Murray vehicle, Groundhog Day “will never be designated a national film treasure by the Library of Congress.” 13 years later it was selected by the National Film Preservation Board for preservation in the Library of Congress. 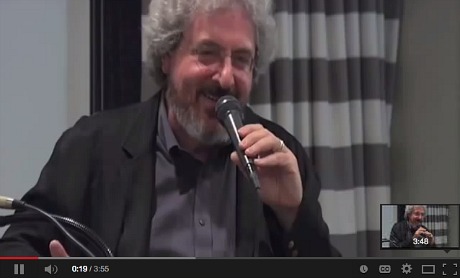 Here is Ramis riffing about various religious and philosophical interpretations of Groundhog Day.

Ramis’s best known acting roles were in Stripes (’81) and the original Ghostbusters (’84), when he was fairly thin and young-looking. He gave himself a came role in Groundhog Day, and I remember saying to myself, “Jeez, he’s put on more than a little weight.” It was then and there I started to feel a slight concern for his health.

The Chicago Tribune‘s Mark Caro was the first to report about Ramis’s passing.

Ramis’s best directing efforts besides Groundhog Day were Caddyshack (’80)
National Lampoon’s Vacation (’83) and Analyze This (’99). Ramis’s biggest all-time bomb was Stuart Smalley Saves His Family with Al Franken. Ramis’s Multiplicity (’96) (w/ Michael Keaton) wasn’t half bad and Analyze That (’02) was reasonably decent. But there was only Groundhog Day — why discuss anything else at any length?

Here’s Eric Kohn’s tribute piece — “Harold Ramis Was a Serious Filmmaker Who Made Us Laugh.”