Boris Kachka‘s New York piece about our Oscar blogging demimonde, “For Their Consideration”, will be online Tuesday morning around 8 am Eastern. It’s now available via New York‘s iPad app and also at L.A. newsstands. I bought a copy this morning around 7 am. I have my arguments with this and that portion but it’s a relatively fair-minded, well-honed, smoothly written piece. Kachka is a very good writer. He quoted me honestly. It says that a lot of people on my side of the fence have put me down, but in my mind these people are odious, tip-toeing one-eyed jacks. I basically come off as a sober but eccentric sui generis transparent sort with some minor but tolerable flaws. Boris didn’t give me credit for being a relentless workhorse but I guess that speaks for itself. Kachka says that in early 2013 I “predicted glory for Saving Mr. Banks on the basis of a leaked script alone”; in fact the title of that piece was “If Saving Mr. Banks Is As Good As The Script” — the operative term was “if.” The New York proofreader failed to correct the spelling of Hennessy cognac — the print edition of the article spells it “Hennessey” but that’ll be fixed online and on the iPad version soon. David Poland, Steve Pond and Kris Tapley are mentioned once and that’s all; I’m not recalling that Indiewire‘s Anne Thompson is mentioned at all. It’s basically about Sasha Stone, Tom O’Neil, Scott Feinberg, Pete Hammond and myself. Nikki Finke is quoted and she sounds like a snitty, sour-attitude type. I’ll post a more thorough response tomorrow morning or very late tonight. 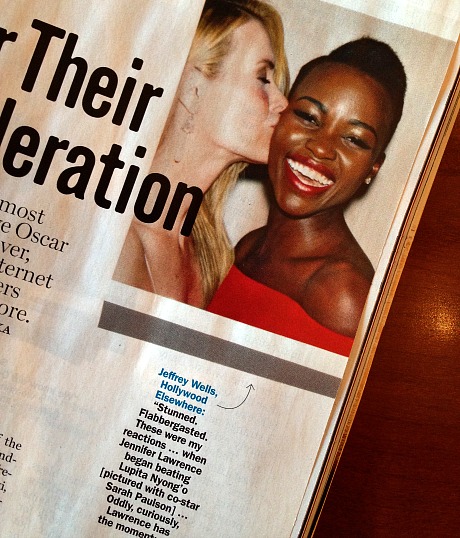 I had been told that the article would be online last night around 6pm Pacific, but they’re putting it up tomorrow because New York is now a biweekly with more content than the weekly normally had in past issues “and they don’t want to put it up all at once or stuff will get forgotten and lost in the shuffle,” a source explains. “With stuff like this story that doesn’t have fast-breaking news, they want to give it room to breathe. So tomorrow it will run big.”