Restoration guru and all-around film expert Robert Harris has seen and spoken out about William Freidkin‘s notorious visual re-imagining of The French Connection (’71), which will be viewable on Fox Home Video’s upcoming Blu-ray of this classic Oscar-winning film, due on 2.24.09. 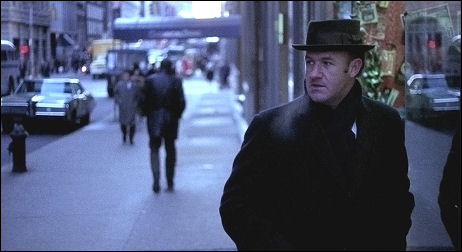 Captured from the forthcoming Blu-ray French Connection — the color extracted, de-focused, reduced and blended with black-and-white.

Harris’s fundamental point is that “what one is seeing in this Blu-ray incarnation is no longer the Best Picture of 1971,” he writes. “It is a re-vision. Like many of the Disney animated classics, it has been visually re-imagined.

“What Friedkin, and his colorist have done is to cross-pollinate 1930s and ’40s dye transfer technology with the modern digital world, and the fact that they carried out this experiment shows just how talented Mr. Friedkin remains as a filmmaker and technician.

“Friedkin references John Huston‘s Moby Dick as the precursor to his work on The French Connection, and while true, the reality goes directly back to the mid-1930s and the period up to WWII. Moby Dick was not a Technicolor production. It was photographed on standard Eastman Kodak 5248 color negative, and then printed by Technicolor in dye transfer, but with the extra black & white record. [Note: Referred to in some circles as a “gray negative.”] I’m sure that [Friedkin] knows that.

“What is interesting here is that Friedkin and his colorist have taken things a step further. Not simply wishing to add the extra record, they also extracted the color, de-focused it, reduced it, and laid it back on top of the black & white, to yield a higher contrast with lower chroma. 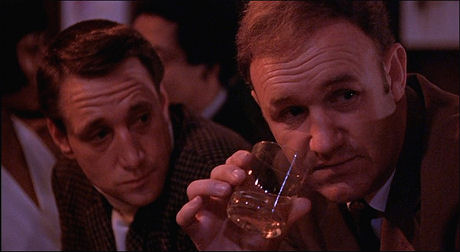 From the 2005 standard DVD of The French Connection. 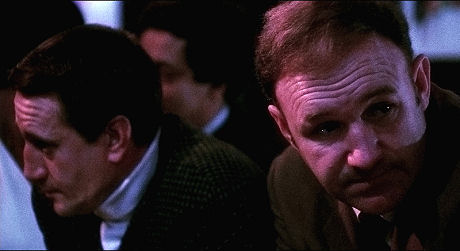 From the new Blu-ray version.

“This is not your father’s French Connection, but a very interesting and beautiful one. If I were able to make a single change, it would have been a simple one. I would add a third disc — the film is certainly worth it — with the original Academy Award winning version of the film, as seen in theatres in 1971. I would issue this, the new pasteled French Connection ‘redux’ plus the third disc of extras.”

Part of Freidkin’s commentary on the process he applied to the French Connection Blu-ray version has been quoted as follows: “The main reason, I think, I was drawn to this process is because of the skin tones. The skin tones on an average color film are usually too warm. The makeup look, pancake makeup, tends to make the skin look darker, richer, warmer, rather than pale.

“In The French Connection, nobody wore makeup. I wanted to say that a lot of you might look at this and say, ‘Gee, the normal version of that looked just as good.’ Well, it may, to your eye. But to my eye, and what I’m looking for here is less color, because, to my mind, bright and extravagant is associated more with a comedy or a musical. And for dramatic purposes, I wanted the pastel color that is achieved by this process.”