To judge from three recent docs about bullet-dodging rappers living in volatile ‘hoods, the most intense and socially relevant rap music these days is coming out of the Caribbean area.
George Gittoe’s Rampage makes the case for the rap community in south Miami, Asger Leth’s Ghosts of Cite Soleil injects rap into the hell of Haiti’s poltical turmoil, and directors Jauretsi Saizarbitoria and Emilia Menocal show what the Cuban rap scene is about in East of Havana. 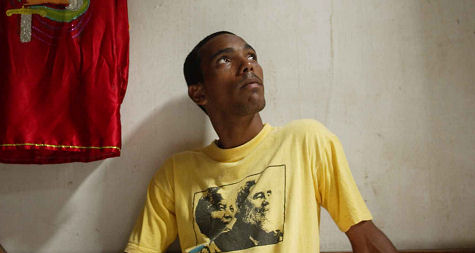 Each film has its own style and aesthetic, but Saizarbitoria’s film is quite different than the other two, and not just because Charlize Theron produced it.
Caught earlier this week at South by Southwest by HE columnist Moise Chiullan, Havana is about the popularity of underground rap groups in Cuba and particularly three members of El Cartel, one of a small number of rapper groups in the suburbs of Havana.
< ?php include ('/home/hollyw9/public_html/wired'); ?>
There are two things that set El Cartel apart from standard-issue American rappers — gender equality (a relatively rare thing in hip-hop circles) and sharply political lyrics.
Instead of rapping about bitches, ho’s and flashing dough around, Cartel’s Mikki Flow, Soandry and Magyori (i.e., a female) tell stories about the daily struggle of living in post-Soviet Cuba .
The story surrounds the cancellation — censorship — of Cuba’s annual Rap Festival in 2004. Government representatives say it was due to hurricane damage, but the homie-in-the-street view is that The Man is keeping them down. 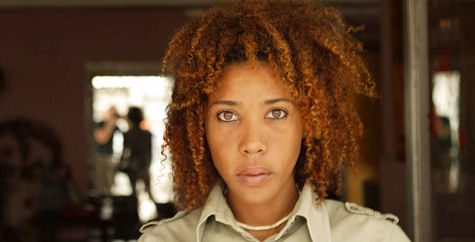 The film says something quite interesting, which is that as much as Cuban citizens may fear the power of the government, the government fears its people and their freedom of expression exponentially more. Political unrest isn’t ebbing away. Poverty is worsening, economic resources are being more and more depleted, and Cuba’s long-standing dictator Fidel Castro is getting older every day.
Most Americans are unaware of the crushing effect of the Cuban embargo, and how 90 miles from the U.S. lies an island nation where there are computers but no internet and music but no iPods. But life moves along and things happen “por invento” — i.e., by invention.
Living life the Cuban way is a central concept to the poetry these rappers create: they use their passion and pain to distill literate, provocative lyrics that leave a profound impression on you. Their rap pounds to the rhythm of el corazon del barrio (the heart of the ‘hood) and uses this evolving art form to its pinnacle.
When word spread around South by Southwest crowds that Theron was Havana‘s producer, there was talk all over about her “doing it for credibility” or “trying to make it look like she cares.” Not quite so. The directors and producers of East of Havana have known Theron since she came to the U.S. from South Africa. They also acted as a surrogate family for her when she was “this little South African girl who didn’t speak any English.” 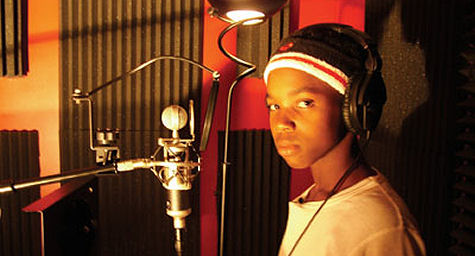 East of Havana almost didn’t happen, as the filmmakers made it into Cuba just a few weeks before President Bush further clamped down on travel to Cuba. Too bad — the El Cartel crew has expressed a strong desire to travel around and explore other cultures, given the opportunity.
Wim Wenders The Buena Vista Social Club showed us one side of Cuban music and culture, but East of Havana finally reveals the voice of contemporary Cuban youth and the rise of a very different new generation.
Look for more about this film in the coming months, as it was one of the most heavily-buzzed films of the festival.

Before last Sunday night I thought of Haiti as a hopeless Caribbean shithole, one of the worst places to live in the world because the government corruption and the politically-motivated beatings and killings never seem to stop, and because the poverty levels for most of the citizens are beyond belief.
I still see Haiti as an island most foul, but a knockout documentary called Ghosts of Cite Soleil, a kind of Cain-and-Abel story that was filmed just before, during and after the overthrow of Haitian president Jean Bertrand Aristide in March 2004, has added a new dimension.

I now see Haiti as less of a Ground Zero for abstract political terror and more of a place where people on the bottom rung are trying to live and breathe and create their own kind of life-force energy as a way of waving away the constant hoverings of doom.
In short, this excellent 88-minute film, directed by Asger Leth (the son of Danish filmmaker Jorgen Leth), adds recognizable humanity to a culture that has seemed more lacking in hope and human decency than any other on earth. I saw it at the Wilshire Screening Room two and a half days ago, and it’s been a kind of growth experience for me. I feel like I almost “get” Haiti now, and I haven’t stopped telling people about it since.
Everyone will say that Ghosts is City of God but in ‘real’ verite terms…and it is that, of course. But it’s less about violent street crime than stink-from-the-head Haitian politics, and it explores an unusual romantic triangle between a white French female relief worker namd Lele and two gangster brothers, 2pac and Bily (not “Billy”), and it has a tragic ending that touches you as much as any well-crafted Hollywood tearjerker could…and yet it happened all on its own.
2pac and Bily are in no way the “good guys,” but in a way they are. They wave guns around and talk all the time about defending their territory or making an enemy back off or perhaps having to kill each other, but somehow the film makes them seem like half-sympathetic pawns…somewhat vulnerable sociopaths desperately trying to escape from their cage. 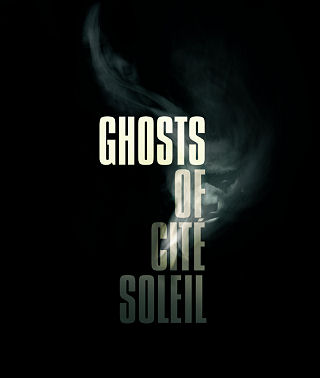 The brothers were leaders of gangs (there were five altogether, all of them known as “the Chimeres”, which is French for “ghosts”) who were being paid big money by the Aristide government to rough up or in some cases eliminate political oppo- nents. Director George Hickenlooper (Factory Girl), who invited me to Sunday’s screening in his capacity as one of the doc’s exec producers, said 2pac and Bily received “hundreds of thousands” of dollars.
When Aristide was finally forced out of office 2pac and Bily were suddenly targets of the new guys in power who wanted to get rid of all remnants of Aristide’s reign, including the “muscle.”
What was special in the making of Ghosts of Cite de Soleil was that Leth had totally open access to both brothers (as well as their government opponents), and also that life played out like a story written by a skilled dramatist.
This is precisely what Ghosts of Cite de Soleil could be the next time — a dramatic movie shot on location in Haiti with actors, a script, grips, electricians, etc.
On Monday I spoke with Cary Woods, the doc’s executive producer, who agreed that Ghosts of Cite Soleil could become a mainstream feature because (and this is primarily me talking) it has all the Shakespearean elements: poverty, political warfare, corruption, the cycle of violence, Cain and Abel, a romantic triangle, and a tragic finale. 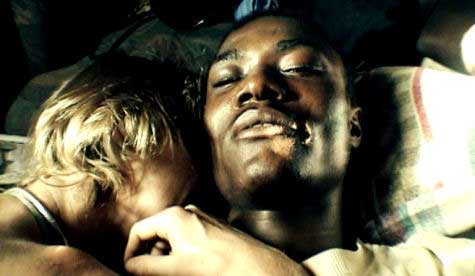 And as a scripted feature it could get a bit more into the warring-brothers- sleeping-with-the-same-woman thing, which the doc doesn’t really run with.
Woods told me that a certain big-name actress has expressed interest in playing the Lele character if and when a script is written and a film is up and rolling, and then producer Seth Kanegis called me from somewhere in the Caribbean Tuesday afternoon and said Woods is looking to hire a distinguished, big-name writer to do the screenplay.
This would be a perfect feature for Oliver Stone, Alejandro Gonzalez Innaritu, Werner Herzog…any director who could take the grit and social squalor of Haiti’s Cite de Soleil and reenact the story with feeling and realism.
The thing that needs to happen right now is for Ghosts of Cite Soleil to be accep- ted into the Cannes Film Festival’s Director’s Fortnight section so the festival-scout community can see it and talk it up. And then it should go to Toronto Film Festival in September, which would probably lead to some kind of distribution deal.
A film like this can only do what it can do. Film buffs and admirers of hot-button filmmaking and drama-in-the-rough will go for it, but some movigeoers would probably have a bit of difficulty with a film of this sort…a raw-looking, hand-held video piece about killings and squalor and interracial sex. 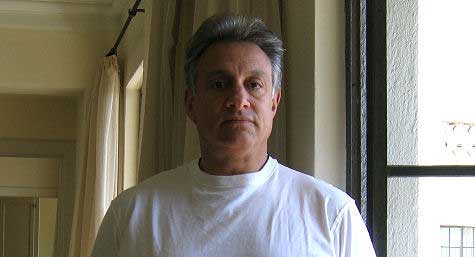 The feature that could come from this — that’s the thing. But there are miles to go before that happens…if it happens at all. Life is a gamble and movies are about rolling stones slowly uphill.
I haven’t mentioned the Wylcef Jean hip-hop on the soundtrack (the Haitian-born musician is also one of the film’s exec producers) and 2pac’s seeing himself as a burgeoning hip-hopper and his dream of becoming a musician-star. A Wyclef Jean soundtrack CD of some kind would, I understand, be part of the Ghosts package when and if it opens theatrically. I’m not 100% sure about this, but it would make sense.
Look for more about this film in the coming months, as it was one of the most heavily-buzzed films of the festival.