Conscientious reviewers who plan on reviewing The Bucket List should probably try to hunt down a VHS tape of a British-produced 1988 film called Hawks. It’s about two terminally ill patients (Anthony Edwards, Timothy Dalton) in a grim English hospital yearn who plot an escape for one last wild time, and who hook up with two English women (Janet McTeer, Camille Coduri) on their way to the brothels of Amsterdam . At least for curiosity or perspective’s sake. 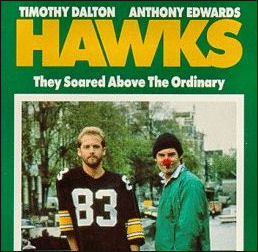 An Amazon enthusiast has called it “a rare gem that balances humor and pathos and avoids maudlin sentimentality in handling a very serious issue. The chemistry between Dalton’s bitter but lively intellectual and Edwards’s cocky but vulnerable jock propels the film to great heights. And while they keep the humor coming, neither screenwriter Roy Clarke nor director Robert Ellis Miller ever forget the direction that Decker and Bancroft’s lives will ultimately take.”