This high-def trailer for Robert Reiner‘s The Bucket List (Warner Bros., 12.25) is one of those trailers that appears to tell you every major plot beat in the film, start to finish. It even appears to divulge which character dies early and which one survives so he can hug his estranged granddaughter. It seems so on-the nose, so Reinerish…I don’t know. 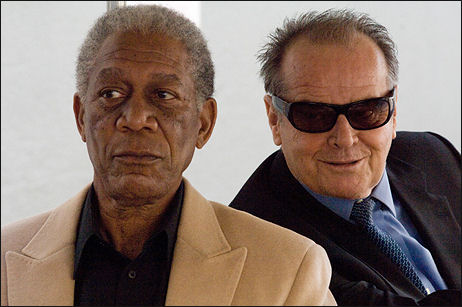 I haven’t read Justin Zackham‘s script (has anyone?), but I’m seeing this invisible subtitle that says, “Okay, here’s the whole movie including the ending. Now, would would you like to see the feature-length version?

Bucket List thoughts (i.e., things to do before you’re dead) glimpsed on a yellow note pad: 1. Witness something truly majestic. 2. Help a complete stranger. 3. Laugh until I cry. 4. Drive a Shelby Mustang. 5. Kiss the most beautiful [remainder of sentence obscured, but presumably it doesn’t say “kiss the most beautiful dog”]. 6. Get a tattoo. (What’s so spiritual and life-affirming about getting a tattoo?) 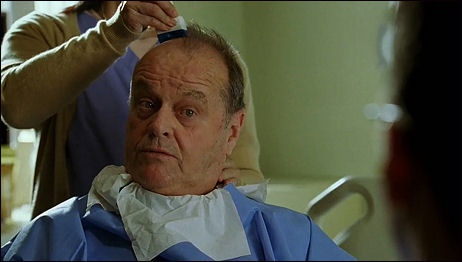 The question should be, what would two terminally-ill guys without much money do if they wanted to kiss the sky before dying? That notion has no place in Reiner’s head. Not on a Warner Bros. budget, at least.

Baldness sidebar: After Nicholson appeared on the Oscar telecast last February with his head shaved, it was understood this was due to his character, a rich obnoxious blowhard who grows a heart when faced with his own mortality, undergoing chemotherapy, and that he’d be doing the egg-bald thing throughout the film.

Except the trailer shows that his hair is shaved off in the film (presumably in preparation for brain surgery) but he doesn’t spend the whole film bald, as he’s shown in every scene but one with his sparse thatch intact. 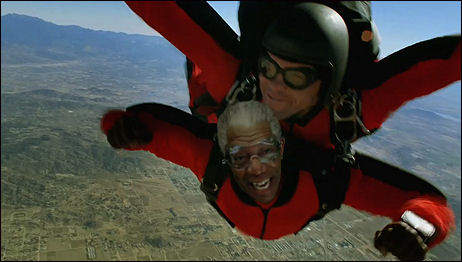