HE-posted a few weeks ago: “First and foremost Mank has been made by and for film monks — smartypants types, devotional cineastes, those with a general sense of X-factor sophistication, guys like Bob Strauss, etc. That probably leaves out a certain portion of the community who will bestow earnest praise for its technical accomplishments. We all know what that means.”

While Mank currently has a respectable 88% Rotten Tomatoes rating, it has a slightly more concerning 79% rating on Metacritic. A reasonably decent aggregate between them, agreed, but then I read Ann Hornaday’s 11.18 Washington Post review, a half-and-halfer, and I realized that my respectful and admiring assessment of David Fincher’s film wasn’t as widely shared as I thought.

And then Mank began streaming on 12.4, and views of certain industry folk began to surface on Twitter and Facebook. This morning two Facebook threads this morning — one launched by Paul Schrader, another by Dale Launer — gave me pause.

Schrader complained that Mank “fails the first obligation of telling the story of a flawed protagonist — to convince the viewer that this character merits two hours of their time.” I replied that I initially felt this way, largely because Gary Oldman’s Herman Mankiewicz (20 years too old to be playing a 40something) to be mostly about being soused.

“But then, curiously, I began to like him more and more. Sappy as it may sound, he quipped and charmed his way into my heart.” And then Tesla executive Landon Johnson asked “how many times did you watch it before it charmed you?” And I replied “once” but at that very moment I knew Mank was in trouble with working industry types and related know-it-alls.

Mank will still be Best Picture-nominated, I suspect; ditto Fincher for directing and Eric Messerschmidt‘s black-and-white cinematography. But to go by almost everyone Amanda Seyfried‘s performance as Marion Davies is easily the most admired element — she’s the only real slam-dunk.

Consider Launer’s Facebook critique, which frankly made me go “hmmm.” A longtime seasoned screenwriter and a man of candid description and admission, he riffed on Mank in real time, and didn’t cut it much slack.

“I was going to have a nice evening by ordering in and watching Mank, which from the trailer looked stunning,” Launer begins. “But from the trailer, I wasn’t sure if it was a good movie or not. It is not.

“Annoying, pretentious dialogue dominates the movie. The writing has the feel of someone who went to an Ivy league school and want to show it off in their writing. Hence dialogue that sounds very ‘drawing room’ (or so it attempts) and is reaching for a sophisticated feel. This gives it a slightly ‘old timey’ feel — but not in a good way. A lot of ‘clever’ talk, but in statements rather than actual dialogue…witticisms but nothing that approaches reality. Superficially classy, but without elegance. Amateurish, like when a studio hires someone with a refined background and assumes they can write a compelling story. First with ‘exposition’ like someone saying ‘You remember when…’ instead of just showing us. I’d rather SEE the flashback.

“Then there’s a scene where there’s a writers room filled with east coast playwrights and journalists and they’re introduced as though the audience will be impressed. Best to impress us with their actions rather than their introduction. This is going to be a slog but to be fair, I’m only 28 minutes in and had to take a short break so my annoyance doesn’t turn out out and out anxiety. The first act is about to end (I think) and there should be a direction that takes off in an interesting way.

“The look, however is sensational. Shot on a digital black-and-white camera — production design, cinematography and the direction — all top notch.

“I’ve never had the experience of reading a script that started out badly written, and then got good. I’ve read scripts that started out slow and picked up, but that’s to be expected. And I’ve never seen a movie that was badly-written, suddenly become well-written. Never. It is not uncommon for a reader to give a screenplay 15 pages, but you can usually tell it’s bad on the 1st page or two. And this movie had all the earmarks of bad writing.

“And I do remember it being bad form to exit a screening before a movie was finished. But I’m going to take a different stand on this issue. Giving respect to a writer is one thing, but giving respect to writing is another. A bad movie is ALWAYS a function of bad writing. I’ve certainly seen good scripts get hurt in the development process, and I’ve seen directors hurt movies too. But a great script is literally fool-proof.

“No, you won’t get a perfect cast (Danny DeVito being cast as low-level gigolo), or they’ll cut out something important for the story or the character (why did Vinny take six attempts to pass the bar? A little dyslexic, a character trait which reverberates thru the story). Bad, amateurish writing almost always has the same odor – 1. Underwritten characters. 2. Dialogue that doesn’t really function as dialogue, but instead [is] just two people making statements back and forth — just works like pretentious faux dialogue, it doesn’t flow, doesn’t feel real, and as a result, doesn’t work. 3. Ridiculous behavior of characters. 4. Lack of authenticity — the story feels made up — usually the work of a ‘hack’ writer — who instead of utilizing elements from real life – from newspaper articles, magazine articles, true stories they’ve heard, true stories, dialogue and people they’ve met — they use ‘tried and true’ story elements, twists, characters, and gags from other movies. The colors in their paint box are not original, but from other films. (this is especially annoying when you see a fascinating true story rich with authentic bits – and those bits are replaced with cliches.)

“So a bad movie is the fault of people in the business who fail to understand what is or isn’t good writing, who don’t know any better but should (usually studio execs, producers, director) who fail to understand what is good writing. I feel walking out on a movie that is crap — is a statement to that effect. And I’ve done it many times. When a movie is bad, it actually makes me angry. ‘How did this piece of shit get made?! How did someone read that script and say – ‘Great!’ …? It’s insulting.” 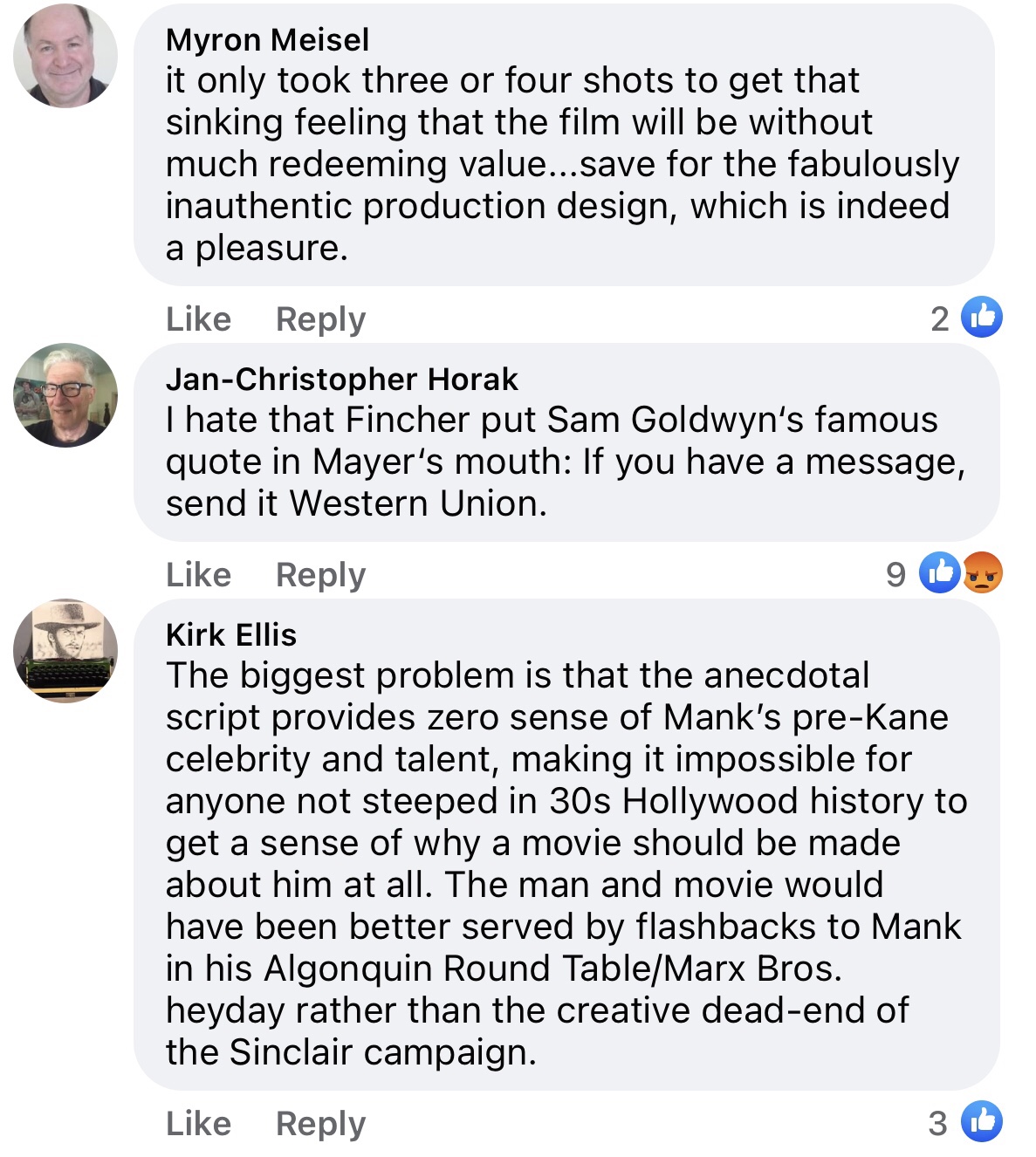