HE to Jaclyn Moore: Chappelle Has Never Been “Goofy”

The Stalinist prison guard living inside Dear White People showrunner and writer Jaclyn Moore has emerged. For she’s attempting to persuade Netflix to zotz Dave Chappelle‘s The Closer because his remarks about trans people, she feels, are prejudicial and uncool.

Last night Moore stated on Twitter and Instagram that she’ll no longer work with Netflix after watching The Closer. “After the Chappelle special, I can’t do this anymore,” Moore wrote. “I won’t work for Netflix again as long as they keep promoting and profiting from dangerous transphobic content.”

If I was a Netflix honcho, I would reply to Moore as follows: “I hear you. You’re not altogether wrong. Chappelle’s views on trans women certainly don’t mirror our own, and we hope you and your community understand that. This aside, we deplore Stalinist censorship and don’t approve of efforts by anyone to muzzle anyone, least of all a brilliant comic whose entire career has been about considering the view of persons like yourself and occasionally saying ‘nope, not me, sorry.'”

HE to Moore: Anyone who partially describes Chappelle as a “goofy” comic doesn’t really hear him or get where he’s coming from, no offense. He’s not goofy or wacky, and he doesn’t live in a doo-wacky, doo-wacky, wah-wah world.

Chappelle: “In our country, you can shoot and kill a n***a, but you better not hurt a gay person’s feelings.” 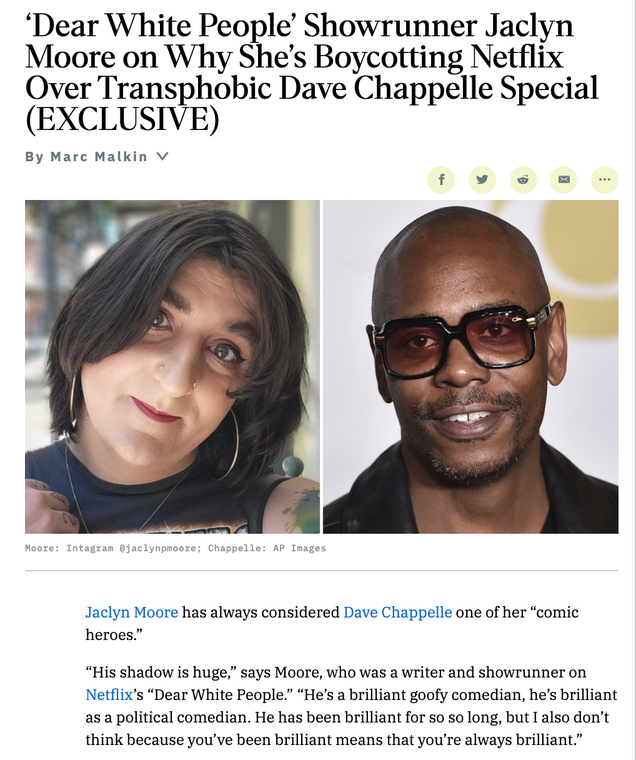 October 7, 2021by Jeffrey Wells35 Comments
« Previous post
HE Shed A Tear Last Night
Next post »
HE to Vaccine Refuseniks