I take back my concern, based on an early trailer and general word-of-mouth, that the Farrelly Brothers‘ The Heartbreak Kid might be “a much coarser and more slapsticky thing than” Elaine May‘s 1972 original film of the same title, as I said in a short piece that went up on 8.13. 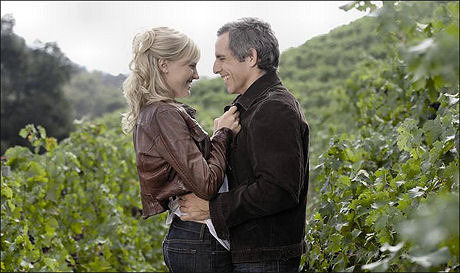 I feared that it might have “fewer mixed-bag subtleties in terms of the characters” and might be…well, sort of crude and apeshit and anything-for-a-laugh commercial, in part because I’ve long felt attached to the Jewish-ness of the original and I didn’t want to see that tossed aside. And I was wrong for thinking this. I was wrong for not trusting the Farrellys. The Heartbreak Kid may not be a great comedy, but it has a tough point of view that it sticks to, and for this it deserves a salute.

Their film, which I saw last night, is significantly coarser than May’s, but it’s also a lot funnier. Not in an intimate, up-close-and-twisted sense, which is where May’s film was coming from, as much as from a typically perverse Farrelly Bros. place, which is to say adult and sophisticated but courting the constant notion that we’re all selfish and self-destructive to an amazing degree, and that fate and happen- stance can be horribly cruel forces.

In other words, the new Heartbreak Kid is actually darker — a good deal more sardonic and despairing of male-female relationships — than May’s film, and it has one of the blackest endings of all time with as good a closing line, in its own way, as “nobody’s perfect” was for Some Like It Hot. It’s a two-word line that I won’t repeat, but I was sitting there going “okay, okay” and then along came that closer (beautifully spat out by star Ben Stiller) and I laughed out loud and left with a smile on my face. 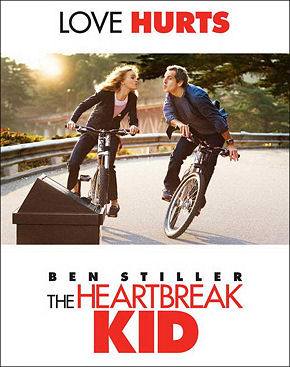 The fact that David Bowie‘s “Suffragette City” — one of my favorite all-time songs — plays over the closing credits only added to the pleasure.

I’m a Goyim, of course, but I’ve twice been called an honorary Jew by Jewish friends (due to my abundant Jewish guilt) and I strongly relate to Jewish humor, and I was afraid that the Farrelly Bros. Kid wouldn’t be as pyschologically grounded or neurotically character-driven as the ’72 film, especially in terms of Charles Grodin‘s self-absorbed, borderline deranged sporting-goods salesman who primarily saw women as challenges, and began to disengage once he’d won them over and/or possessed them

The theme of the film, as conveyed on the one-sheets,” has been thought to be “love blows” or “love hurts,” but it’s really about what a horrible slog it’s become in this day and age to make a relationship work. This is not a film that ends “with a kiss and black ink on the books,” in the words of the great Harry Pebbel, and I respect the shit out of the Farrellys and Stiller for taking things in such a dark direction. 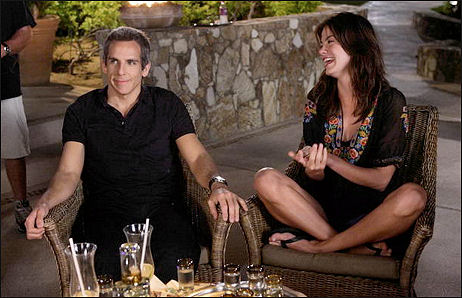 The central observational touchstone of the new Heartbreak Kid is spoken by a supporting character — Rob Corddry, who plays Stiller’s best friend “Mac” — in the third act. I didn’t write it down so what follows isn’t verbatim, but it’s fairly close: “I’ll tell you the secret to a happy marriage. It is grovelling and kowtowing and jumping through hoops whenever she barks for decades and decades as you wait for the sweet embrace of death.”

Because of this line, The Heartbreak Kid is probably going to have trouble with women once the word gets out, but again — you have to admire the cojones of the Farellys for putting it in there. You can call it a grimly realistic view of relationships or one that is at least somewhat (if not baldly) misogynist, but as soon as I heard this, I went “wow…ballsy!”

Stiller gives one of his better performances — alert, vulnerable, brave, inventive. Michelle Monaghan is also her usual engaging self, although the first time I said to myself, “What’s with the spazzy look in her eyes and her short teeth? She looks hyper and nerve-jangled.” Jerry Stiller is appropriately blunt and vulgar as hsi son’s on-screen dad. Malin Akerman is a howl as the insane and malignant blonde that the younger Stiller marries early on, much to his later regret. Corddry and Carlos Mencia give the two best supporting perfs.