Fearing possible reprisals that may be visited upon three young stars of Marc Forster‘s The Kite Runner by politically thuggish elements in Afghanistan, where the film is set, Paramount Vantage is delaying the film’s release from 11.2 to 12.14, at which point the boys will be out of school and free to leave Afghanistan for a presumably safe harbor. 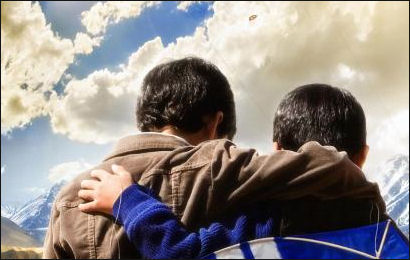 A 10.4.07 N.Y. Times story by David Halbfinger says that Ahmad Khan Mahmidzada, Zekiria Ebrahimi and Ali Danish Bakhty Ari and their families are looking to get the hell out of Dodge — Kabul — “over fears that they could be attacked for their enactment of a culturally inflammatory rape scene.”

The move might possibly be permanent, Halbfinger adds, given those wacko Middle Eastern Islamics and their sense of holy vengeance about any form of art or propaganda (particularly the kind funded and/or distributed by a Great Satanic entity like Paramount Vantage) that is construed to be culturally offensive.

“Warnings have been relayed to the studio from Afghan and American officials and aid workers that the movie could aggravate simmering enmities between the politically dominant Pashtun” — allies of the Taliban — “and the long-oppressed Hazara,” writes Halbfinger. 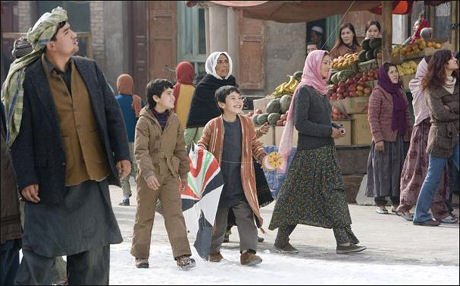 Here’s a website that’s all about spreading information about the threat and getting funding to help the boys and their families blow that Kabulian pop stand and resettle somewhere safe.

“In January in Afghanistan, DVDs of Kabul Express — an Indian film in which a character hurls insults at Hazara — led to protests, government denunciations and calls for the execution of the offending actor, who fled the country,” Halbfinger writes.

Based upon a 2003 novel by Khaled Hosseini, The Kite Runner spans 30 years of Afghan history, from a time just before the Soviet invasion of the early ’80s through the Taliban power grab that began in 1995 and ended in ’01.

The story hinges on a friendship between Amir, a wealthy Pashtun boy (Ebrahimi), and Hassan (Mahmidzada), the Hazara son of Amir’s father’s servant. The inflammatory scene shows Hassan being raped by an older Pashtun creep. Later, Sohrab, a Hazara boy (Bakhty Ari), is “preyed upon” by a corrupt Taliban official, Halbfinger writes. 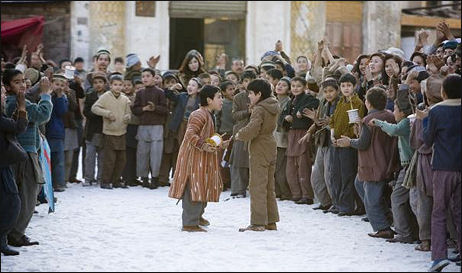 Ahmad Khan Mahmidzada told AP writer Alisa Tang in a story that ran on 9.23 that he and his family could be ostracized or even attacked. His father, Ahmad Jaan Mahmidzada, told Tang that “in Afghanistan, rape is not acceptable at all. This is against Afghan dignity. This is against Afghan culture. When we argued, they said ‘We will cut this part of the film. We will take it out of the script. This part will not be in the film.'”

The Taliban “destroyed nearly all movie theaters in Afghanistan, ” says Halbfinger, “but pirated DVDs often arrive soon after a major film’s release [in the U.S. and Europe].”

I love this sentence from the Times piece: “Though [Hosseini’s] book is admired in Afghanistan by many in the elite, its narrative remains unfamiliar to the broader population, for whom oral storytelling and rumor communication carry far greater weight.” 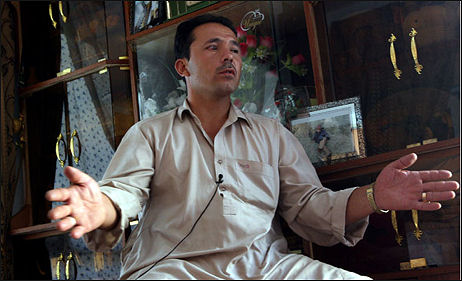 Ahmad Jaan Mahmoodzada, the real-life father of the 12 year-old actor who plays “Hassan” in The Kite Runner

In other words, the broader Afghan population is illiterate and easily swayed by uninformed local sentiment, characteristics which tend to translate in this country into terms like “cretins,” ‘”ignoramuses” and “dumb-ass rednecks.”