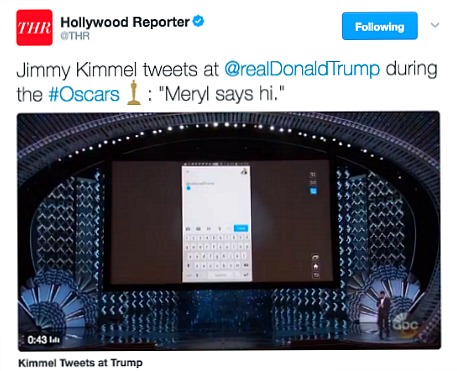 7:20 pm: The tour bus guys can’t put their cameras down…brilliant! They’ll have grade-A video of this moment on YouTube a hundred times over, and they can’t put their cell phones down to save their lives. The reflex can’t be suppressed. And their wardrobes! Denzel pronouncing the Chicago couple husband and wife…that was good. A moment of generosity. Read Nathaniel West‘s “The Day of the Locust.”

7:15 pm: Production design Oscar being given to La La Land…the curse has been broken.

7:08 pm: Hailee Steinfeld and Gael Garcia Bernal presented Best Animated Short Film Oscar to Piper…whatever. GGB: “As a human being, I am against any sort of wall that wants to separate us.” And now the Oscar for Best Animated Feature…Zootopia!

6:55 pm: Charlize Theron‘s tribute to Shirley Maclaine‘s performance in Billy Wilder‘s The Apartment (’60) is well expressed and very moving. Maclaine and Theron presenting the Oscar for the Best Foreign Language feature, which of course will be Asghar Farhadi‘s The Salesman. Farhadi is of course not here due to the Trump administration Muslim ban and particularly his solidarity with those who’ve been denied entrance to this country.

6:41 pm: Mark Rylance presenting the Best Supporting Actress Oscar to Fences‘ Viola Davis — totally locked and pre-ordained. Well deserved, to say the least. And wow, is she pouring it on! A human violin/volcano/firestorm in a red dress. “Captain, oh captain, my Denzel Washington!” Kimmel: “Viola Davis just got nominated for an Emmy for that speech.”

6:25 pm: Cheryl Boone Isaacs without her trademark back-rimmed glasses? Okay, if you say so.

6:14 pm: Dwayne Johnson — a man unburdened by even a semblance of taste, a man who would have a fatal stroke if someone offered him a change to be in a good movie — introduces one of the Best Song nominees, “How Far I’ll Go.”

6:08 pm: Hidden Figures‘ Taraji P. Henson, Janelle Monae and Octavia Spencer “(Algebra’s angels”?) Yo, Katharine Johnson (age 98!). The Oscar goes to Ezra Edleman‘s O.J.: Made in America…of course. Well, it has been predicted for several weeks, no? Edelman: “This is for Nicole Brown and Ron Goldman…and victims of police brutality.”
Kimmel: “O.J., you get an extra slice of baloney on your sandwich tonight.”

5:58 pm: Kate McKinnon and Jason Bateman present the Makeup and Hairstyling Oscar to the Suicide Squad guys. Whatever…congrats. And the winner of Costume Design Oscar goes to Colleen Atwood for her work on Fantastic Beasts. Great, terrific, feel the pride. Huh?

5:46 pm: Alicia Vikander strides on stage to present Moonlight‘s Mahershala Ali with his Best Supporting Actor Oscar. The blogaroos did this — they decided — and then the critics groups and guilds thought it over and followed suit.

5:36 pm: Jimmy Kimmel isn’t a “bring us together” kind of guy, and Mel Gibson isn’t the man for that task either. Kimmel #1: “When I first met Matt [Damon], I was the fat one.” Kimmel #2: “I’d like to say ‘thank you’ to President Trump. Remember last year when the Oscars seemed racist?” Kimmel #3: “Isabelle Ooohpair is here.” Kimmel #4 re Captain Fantastic: “Too often the Academy recommends only movies that people have seen.” Kimmel #5: “Nice dress, by the way…is that an Ivanka?”

5:33 pm: Justin Timberlake and friends have the place rockin’ & boppin’, but who created that silver gleaming glitzy bullshit horseshoe-shaped stage? Are you fucking kidding me? 85% Las Vegas with a touch of Orange County.