“I realize this will sound geeky, but for me a good character match for Hillary Clinton is the old Star Trek character of Dr. Janice Lester, played in the original late ’60s series by Sandra Smith. All it takes is her breakdown scene at the finale when she sobs, ‘I’ll never be the Captain!’ If you haven’t seen it or don’t recall, I’m sure plot capsules abound on the net.” — HE reader ChuckW, writing this morning. 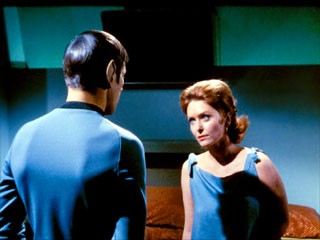 A reliable-seeming online synopsis of episode #79 (original airdate: 6.3.69) states that Dr. Lester, “once involved with Captain Kirk, harbors a deep hatred of the captain, because she, herself, has never been able to captain a starship.”
The best Hillary/Obama analogy so far has come from HE reader Nate West, to wit: “Hillary is Orson Welles‘ Hank Quinlan character in Touch of Evil. Obama is [Charlton Heston‘s] Vargas.”