I’ve been told that producer Jean Doumanian is partnering with the Weinstein Co. to produce a film version of Tracy Letts‘ masterful August: Osage County, which N.Y. Times critic Charles Isherwood called “the most exciting new American play Broadway has seen in years” in his 12.5.07 review. 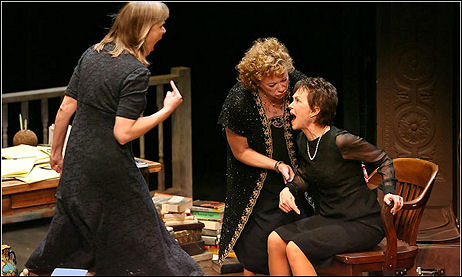 As always, a Broadway hit (Osage County is certain to triumph at the ’08 Tony Awards in June) is one equation and a satisfying hit movie is another. The stage-to-cinema process is always about rethinking, reshuffling, compressing, diluting and, in one way or another, downgrading to some extent. A broader audience = the need to make a play more accessible to Average Joes = problems from the viewpoint of Broadway purists.
The big questions are (a) will the movie version hold to the play’s three-hour length (there will certainly be pressure to trim it down at least somewhat, perhaps as much as a third), (b) will they try to movie-ize it (visually “open it up, etc.) or stick to the pure theatrical scheme of everything happening in the Weston family’s two-story home, (c) who will Doumanian-Weinstein get to direct…Mike Nichols?, and (d) which middle-aged screen actress will play the key role of Violet Weston (i.e., “an evil mom to end them all”), presuming that Deanna Dunagan, whose on-stage performance is said to be legendary, will be shunted aside in favor of a Meryl Streep-level actress with a bit more in the way of marquee power.