Avatar‘s right-wing dissers “are essentially right,” says The Punch‘s Joel Meares. “James Cameron has made over the bitch extraterrestial of his early film, Aliens, and birthed an outer-space race straight from the hearts and minds of leftist hippies everywhere. 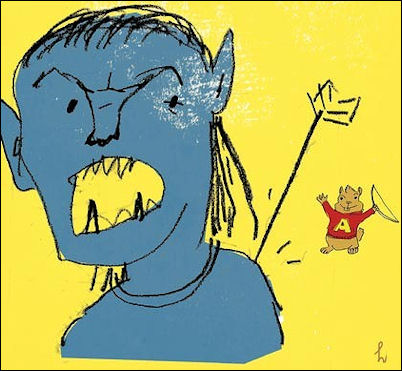 “As a (skim) latte-sipping lefty and current resident of New York, a place that makes Sodom and Gomorrah look like Amish villages, I’m delighted with the result. And so should you be, whether you vote Liberal or Labor.

“As even its critics attest, Avatar is a great entertainment. If there’s an ideological undertone — or overtone — so what? Just slap on your 3D glasses, sit back and disagree.

On 1.2.10 the Sydney Morning Herald‘s Miranda Devine — a conservative — said she’s “thankful for more ‘human-affirming’ movies,” citing Juno and Knocked Up as examples. “Leftist critics have cried foul at both of those,” says Meares, “reading into them a strong anti-abortion message. It’s been argued that the one says it’s better for pregnant teens to keep their babies while the other says career women should not abort theirs.

“I don’t disagree with those sentiments, but I am pro-choice. I didn’t feel the need to decry the hissing pythons of the right once the credits had rolled on either of those films.

“I also tune in weekly to watch 24‘s Jack Bauer save the world from extremists, one mode of torture at a time.

“Hollywood’s entertainments are driven by ideologies right and left — okay, mostly left — that we might not like. Pointing them out is merely acknowledging the obvious. Avatar‘s a big expensive ad for the green lobby. Okay, then what? Does that discredit the entertainment?

“Do we really need to waste any more time writing about it? Or for that matter, responding to those who do?