Three and a half months have passed since Criterion announced its decision to issue its On The Waterfront Bluray (streeting on 2.19, or about three weeks hence) in three separate aspect ratios — 1.33, 1.66 and 1.85. And I’m still trying to understand how this doesn’t undermine if not discredit Bob Furmanek‘s advocacy of 1.85 as a general cropping standard for Blurays and DVDs of all non-Scope films shot from April 1953 on. 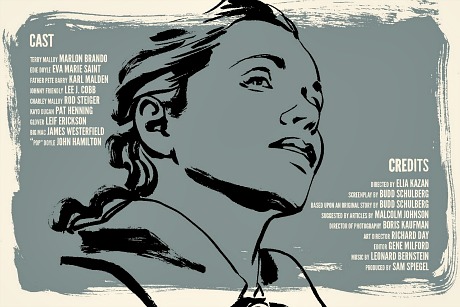 There’s no disputing that non-Scope films began to be projected in U.S. theatres starting in mid to late ’53 and that this standard gathered momentum and was pretty much the across-the-board deal by the end of that year, or certainly by early ’54. Nor is anyone disputing that Elia Kazan‘s On The Waterfront, released in July 1954, was shot by Kazan with the understanding that it would be projected at 1.85. I’ve looked at the 1.85 version on iTunes and while I don’t find it comforting or pleasing, it’s very nicely framed. Kazan was no bum. He knew what he was doing.

Why, then, did Criterion chiefs decide to ignore Furmanek’s research and issue three different versions of Waterfront? Uhm, gee….I don’t know. Because the film breathes much better at 1.33 or 1.66? Because they see merit in my argument about headroom being a really nice and desirable thing? Because they decided that distributors and exhibitors wanting theatrical films to be presented at 1.85 from mid-1953 on so they would look wider than TV screens shouldn’t be the end-all and be-all of watching films on Bluray in the 21st Century?

In my book the Furmanek 1.85 theology went out the window when Criterion decided on this triple-aspect-ratio approach. Criterion is by far the most purist, dweeby, grain-monky home-video outfit in the United States, and if these guys decide that 1.85 isn’t the King Shit of aspect ratios for a classic 1954 film…well, that means something. It means “all bets are off” if a company renowned for cinematically pure standards is willing to accomodate the headroom values that I’ve been espousing for years. It means that the game is basically over for the 1.85 fascists.

From here on the shape of every 1950s and ’60s film being mastered for Bluray is negotiable. If Criterion can play it loose and tap-dancey with the aspect ratio of On The Waterfront, any aspect ratio on any non-Scope film can be fiddled with.

Here’s how I explained it last October in a piece called “Glorious Furmanek Setback“: “Directors and dps of the mid ’50s used and composed 1.85 framings starting in 1953 because they were ordered to and not because they wanted to. I also find it hard to believe that anyone with any sense of aesthetic balance and serenity would have freely chosen 1.85 framing a when the much more elegant 1.33 or 1.66 framings were an option. And so I’ve always felt a profound resentment toward absolutist 1.85 advocates when it comes to evaluating the proper proportion of films of this era.

“I genuinely feel there is something cramped and perverse in the aesthetic eye of anyone who would consider these options and say, ‘It is better to squeeze the action down into this severely cropped-off aspect ratio…it is better to have the action in this or that film confined within a lowered-ceiling aesthetic straight out of Orson Bean‘s cramped office floor in Being John Malkovich.’

“And it is also my belief — my allowance — that the 1950s TV box aspect ratio of 1.33 is somehow more calming than 1.66, that it agrees with and flows naturally from the framing aesthetic of Hollywood of the ‘early ’30s to mid ’50s, which was deeply ingrained at the beginning of the studio-mandated transition era that began in the spring of 1953, and that it conveys a certain naturalism, a freedom, an atmosphere of gloriously spacious headroom…aahh, why go on? You can’t explain this stuff. Either the eyes of the beholder get it or they don’t. Mine know the truth of it. The concept of removing visual information from a frame of film strikes me as wicked and almost evil, in a way.”

“It is different today, of course. Our aesthetic eye, our sense of visual rhyme and harmony adapted decades ago to seeing movies in 1.85, and it’s as natural as breathing now…but not then. NOT then. At the very, very least, if the research-fortified, Movie God-defiant Forces of Furmanek insist on 1.85 framings for Blurays of films from this era, they should at least follow the example of the Masters of Cinema Touch of Evil and now — hark the herald angels sing! — the upcoming Criterion Bluray of On The Waterfront and offer dual or triple aspect ratios.”