Michael Cieply‘s 1.28 N.Y. Times piece about Joel and Ethan Coen‘s Inside Llewyn Davis, based on a recent interview with Joel, states the following: 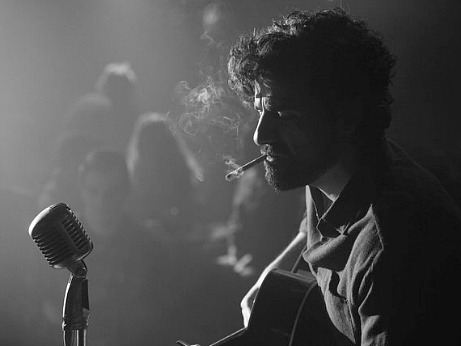 Oscar Isaac in Joel and Ethan Coen’s Inside Llewyn Davis.

(a) The film will privately screen next week in Los Angeles for “some music industry insiders and perhaps a few potential buyers.” Hey, Joel or Scott Rudin, what about a friendly columnist or two attending?

(b) Inside Llewyn Davis will probably screen in Cannes, with or without a U.S. distributor.

(c) “There isn’t quite as much plot as is usual for the brothers,” but then you knew that if you read my 3.9.12 screenplay review. An excerpt: “The Coen’s script, typically sharp and well-honed with tasty characters and tart, tough dialogue, is about lethargy, really. And taking care of a friend’s cat. And seeing to an abortion and trying to get paid and figure out your next move and…whatever else, man. It’s about a guy who isn’t even close to getting his act together, who just shuffles around from one couch to the next, grasping at straws, doing a session recording one day and trying to land a performing gig the next, like a rolling stone, no direction home.”

(d) “For the record Llewyn Davis doesn’t really resemble, or sound like, Dave Van Ronk, whose posthumous 2005 memoir, ‘The Mayor of Macdougal Street,’ written with Elijah Wald, served as source material for the film.” But you also knew that, etc. An excerpt: “I can tell you that the character of Llewyn Davis bears no resemblance whatsover to the Dave Van Ronk I’ve read about over the years. He was always a relatively minor, small-time figure in terms of fame and record sales, but he was heavily committed to folk music, to the West Village musician community, to his troubadour way of life and certainly to everything that was starting to happen in the early ’60s. If nothing else a man who lived large. Llewyn Davis as created by the Coen bros. (and played by the relatively small-statured and Latin-looking Oscar Isaac) is a guy who lives and thinks small, and who’s no match for Van Ronk spiritually either. He’s glum, morose — a kick-around guy trying to make it as a folk musician but not much of a go-getter. He’s vaguely pissed-off, resentful, a bit dull. He can sing and play guitar and isn’t untalented, but he has no fire in the belly. And any way you want to slice it Llewyn Davis is not Van Ronk. Or at least, not in any way I was able to detect.” 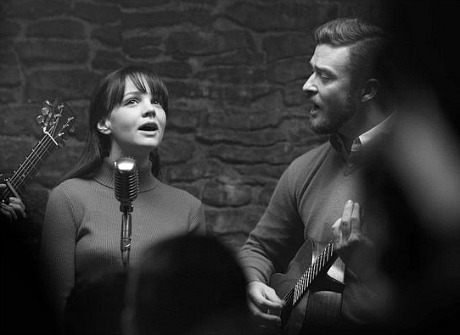 (e) Inside Llewyn Davis “promises to be quintessential Coen brothers fare — but different,”

(f) “It has a certain kinship with Les Miserables” with almost all the principal actors — Oscar Isaac, Carey Mulligan, Justin Timberlake — singing and “lots of duets and trios.”

Possibly significant question: Cieply doesn’t mention whether the film is presented in black-and-white or not (the stills illustrating the piece obviously suggest this), but a monochrome Davis would be delicious. For guys like myself, I mean.