Scott Feinberg reported earlier today that an 11.28 “Vulture” article by Claude Brodesser-Akner has ignited the beginnings of what feels like a suspiciously-timed smear campaign against The King’s Speech. It basically has to do with an eight-year-old Guardian article about Hitler-kowtowing on the part of Colin Firth‘s King George character. 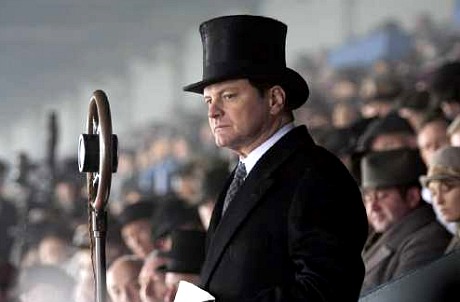 It suggests not so much an anti-Semitic attitude on George’s part as an indifference to the plight of European Jewry at the start of World War II. Maybe so, but things weren’t as cut and dried as they seem from today’s perspective.

Two days ago Feinberg received a letter from “an Academy member” who claimed “there are a LOT of us who won’t vote for King’s Speech” due to the following Brodesser-Akner passage:

“Seeing as Speech is Oscar bait in extremis, this blogger feels morally compelled to note that while the film largely glosses over the Nazi-sympathizing past of the tongue-tied monarch (Colin Firth) and deals with his relationship to an Aussie-born speech therapist (Geoffrey Rush), when it came to actively working to stymie Jews fleeing Hitler’s Germany, George actually communicated quite eloquently.”

Brodesser-Akner was referring to an April ’02 Guardian piece by Ben Summerskill called “MPs Want Quick Release of Queen Mother’s Papers.” It includes the following reference to a public domain document:

“In the spring of 1939 George VI instructed his private secretary to write to Foreign Secretary Lord Halifax. Having learnt that ‘a number of Jewish refugees from different countries were surreptitiously getting into [British] Palestine’, the King was ‘glad to think that steps are being taken to prevent these people leaving their country of origin.’ Halifax’s office telegraphed Britain’s ambassador in Berlin asking him to encourage the German government ‘to check the unauthorized emigration’ of Jews.”

How commonly known in 1939 was the Third Reich’s plans to exterminate European Jews? My understanding is that some of pertinent facts were conveyed to President Franklin D. Roosevelt (and presumably other heads of state) in the early ’40s, but who knew for sure in 1939?

Here’s another wrinkle, which is also contained in Summerskill’s article:

“Support for appeasement of Hitler was common among the British establishment during the 1930s,” he wqrites. “Conservative MPs who publicly opposed the policy, such as Winston Churchill, were threatened with de-selection.

“The historian Andrew Roberts believes that Prime Minister Neville Chamberlain‘s appeasement policy ‘commended itself to the royal family on a number of levels. It was, correctly, considered axiomatic that another war would spell doom for the British Empire.'”

In other words, support for Hitler among the British establishment in the late ’30s was the reigning herd instinct among the tepid and the cautious. Now, what other herd instincts that led to massive disasters can we think of? How about U.S. Congressional support for the 1964 Gulf of Tonkin Resolution, which led to the Vietnam War and was based on total bullshit? Or support by the vast majority of U.S. Senators and Congressmen for invading Iraq in ’03 based on the belief that Saddam Hussein was harboring weapons of mass destruction?

That said, this alleged-Nazi-sympathizer thing could — let’s face it — hurt The King’s Speech among older Hollywood Jews if it’s not quickly turned around. I always thought it was the former King Edward (played by Guy Pearce in the film) who was the alleged Nazi sympathizer, not Bertie.