Why have Warner Bros. and Clint Eastwood decided not to screen J.Edgar at both the Toronto and the New York Film Festivals? The first thought, of course, is a slight “uh-oh…” but that kind of dissolves once you think it through. This won’t be the first time an Eastwood fllick hasn’t made the festival rounds so it’s not that big a deal. Clint has never been a big festival guy. 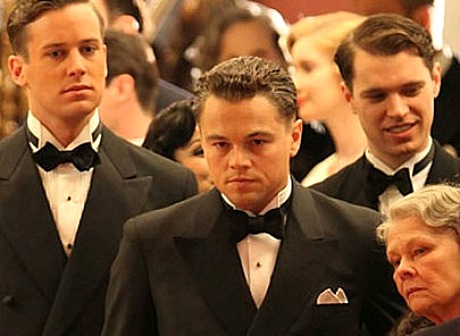 The fact that Toronto critics beat up Hereafter pretty badly is a possible factor, okay, but they might simply have decided it’s better for the buzz to start a bit closer to the 11.9 release date. There’s nothing inherently wrong with waiting for the right moment.

My problem with this film all along has been the physical disparity factor, or the six-foot-tall Leonardo DiCaprio playing the short, squat and bulldog-ish J. Edgar Hoover. The above photo makes Leo seem shorter than he actually is, and I’m wondering if somehow he’s been made to look smaller through the use of large furniture and tall costars (like the 6′ 5″ Armie Hammer) and extra-tall doorways and all that. This was how Marion Cotillard was made to look Edith Piaf-sized in La Vie en Rose, so maybe.

Knowing Clint as I do, the Gay Edgar Hoover angle will be “there,” but in a vaguely suppressed, played-down way, which of course would be appropriate for the rigidly homophobic era during which the saga of J. Edgar and Clyde took place.

In April 2010 I read and reported about Dustin Lance Black‘s script, to wit:

“The scenes between Hoover and FBI ally/colleague/friendo Clyde Tolson (whose last name Black spells as ‘Toulson’) are fairly pronounced in terms of sexual intrigue and emotional ties between the two. Theirs is absolutely and without any qualification a gay relationship, Tolson being the loyalty-demanding, bullshit-deflating ‘woman’ and Hoover being the gruff, vaguely asexual ‘man’ whose interest in Tolson is obviously there and yet at the same time suppressed.

“The script flips back and forth in time from decade to decade, from the 1920s (dealing with the commie-radical threat posed by people like Emma Goldman) to the early ’30s (the focus being on the Charles Lindbergh baby kidnapping case) to Hoover’s young childhood to the early ’60s (dealing with the Kennedy brothers), the mid to late ’60s (Martin Luther King‘s randy time-outs) and early ’70s (dealing with Nixon‘s henchmen). Old Hoover, young Hoover, etc. Major pounds of makeup for Leo, I’m guessing.”