Horses To The Slaughter

The death of three racehorses led to the cancellation of HBO’s Luck, but also, it would seem, to a blistering 3.24 N.Y. Times story, written by Walt Bogdanovich, Joe Drape, Dara L. Miles and Griffin Palmer, about how horses are dropping like flies on the nation’s racetracks, largely due to heartless owners and an over-reliance on drugs. 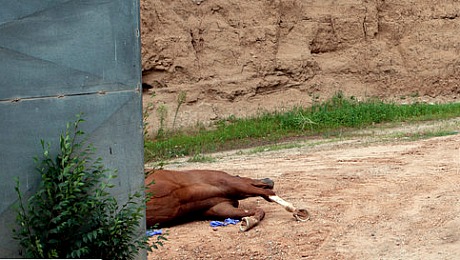 “A state-by-state survey by The Times shows that about 3,600 horses died racing or training at state-regulated tracks over the last three years. Since 2009, the incident rate has not only failed to go down, it has risen slightly.

“The greatest number of incidents on a single day — 23 — occurred last year on the most celebrated day of racing in America, the running of the Kentucky Derby. One Derby horse fractured a leg, as did a horse in the previous race at Churchill Downs. All told, seven jockeys at other tracks were thrown to the ground after their horses broke down.

“The new economics of horse racing are making an always-dangerous game even more so, as lax oversight puts animal and rider at risk.”