The Calgary Sun‘s Kevin Williamson posted an article today (both on the Sun‘s website and on Canoe Jam) about the Judd Apatow myth-fantasy of hotties being attracted to and going out with galumphs, and he quoted yours truly as follows: 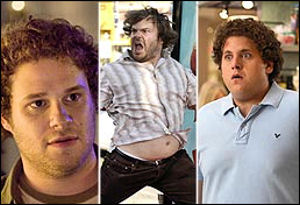 “This is all Judd reliving the dynamics of his marriage. I think everyone knows down deep that…birds of a feather flock together. It’s very unusual for hotties to be with galumphs. Ask anybody. The only reason it happens, and it’s the same in this town as it is in New York and elsewhere, is that the guys are very witty, which women love and find sexy, but also very loaded and have connections.
“Seth Rogen in real life is a hip, smart guy. But he’s playing slackers who wear Cabo San Lucas T-shirts and smoke doobies, and that doesn’t work to my understanding. The only time you’re going to have a guy who’s a 6 with a girl who’s an 8.5 is when it’s about power.”
An actor friend put it to me thusly a few years ago: “All women the world over lie down for the conqueror.” Which is just another way of phrasing the old Oliver Stone–Tony Montana-ism, to wit: “First you get the money, then you get the power, then you get the woman.”