After wandering barefoot in the woods for over a year, Deborah Kampmeier‘s Hounddog, which everyone (and I mean everyone) dissed at Sundance ’07, has finally been acquired for theatrical distribution. The sucker, according to N.Y. Post critic/blogger Lou Lumenick, is Empire Pictures, which plans to open the southern gothic drama in “more than 500” theaters on 7.18. 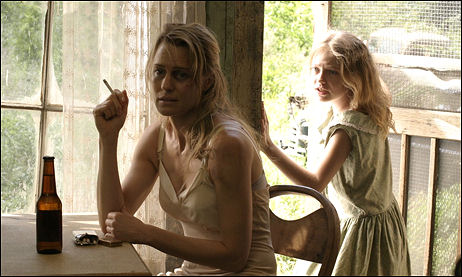 If any movie ever had the words “straight to DVD” tattooed on its forehead, it’s this one. Why could Empire be thinking? Is this a tax writedown?
I wrote the following about Hounddog roughly 14 months ago: “I agree with everyone else that it’s nothing. Nothing to see, nothing to release, nothing to rent, nothing to get shocked or stirred about…just another neo-Faulknerian Southern gothic wallow with a tasteful, non-inflammatory Dakota Fanning rape scene.” Robin Wright Penn (has she dropped the last name?) costars as Fanning’s mom.
I added, however, that Fanning “is a very skilled, super-readable scene inhabitor. That may have been obvious to others previously, but this is the first film she’s had to carry as the star.”
Here‘s what Variety‘s Todd McCarthy had to say