If you’re on the ropes with a life-threatening illness and it doesn’t look good, what difference does it make if you have a cigarette? It’s a tough situation, but if I was Patrick Swayze‘s best friend and he pulled out a smoke and lit up, I’d shake my head but my main attitude would be, “Whatever, man.” 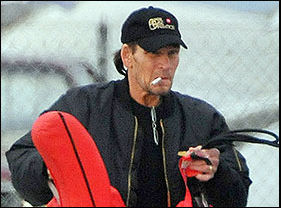 My father’s doing better than Swayze but he’s not in the best of shape either. Bed-ridden, gaunt, stuck in a hospital room. The kids and I paid him a visit last December. He asked to bum a cigarette at one point. I thought about it for two or three seconds and figured where’s the harm at this stage of the game? I told him I don’t smoke but that his grandson Dylan does and that I’d ask. Dylan, 18, visited him a few minutes later and slipped him a butt and a match.
Of course, the only way to sneak a cigarette in a hospital ward is to go outside so the nurses won’t smell it. Except my dad can’t move without someone pushing him in a wheelchair so I knew there’d be trouble. Sure enough, he lit up and a nurse came in almost immediately and gave him hell. My father, a real stand-up guy, said, “It wasn’t my fault entirely…my grandson gave me the cigarette!” The angry nurse found Dylan playing pool in a nearby rec room and grilled him about this. Dylan stood his ground and said he didn’t know what she was on about.
The time not to smoke is when you’re healthy and want to stay that way. But if your goose is more or less cooked, pick your poison and be at peace.