One of the late Steve Irwin‘s contemporaries, cameraman and spearfisherman Ben Cropp, has spoken to a cameraman friend who was nearby when Irwin was killed yesterday by a sting ray tail and has seen the footage. Here’s Cropp’s description, as passed along to The Australian on Saturday night: 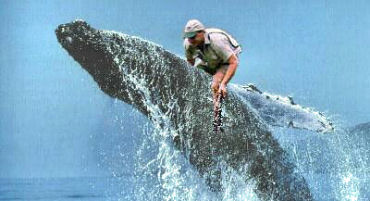 “Steve was up in the shallow water, probably 1.5 meters to 2 meters deep, following a bull ray which was about a meter across the body — probably weighing about 100 kilograms — and with quite a large spine. And the cameraman was filming in the water.”
Cropp said the stingray freaked when he felt cornered by Irwin and the cameraman. “Steve was alongside and there was the cameraman ahead, and [the animal] probably felt there was danger and it balked. It stopped and went into a defensive mode and swung its tail with the spike. Steve unfortunately was in a bad position and copped it.
“I have had that happen to me, and I can visualize it — when a ray goes defensive, you get out of the way. Steve was so close he could not get away, so if you can imagine it — being right beside the ray and it swinging its spine upwards from underneath Steve, and it hit him.”