Steve McQueen‘s Small Axe has won LAFCA’s Best Picture prize, with Chloe Zhao‘s Nomadland coming in second. Except Small Axe is not a film but a five-film miniseries made for British TV. What LAFCA really means is that some believe that the 128-minute Mangrove is the year’s finest feature, and others feel that the 68-minute Lovers Rock is the best.

In a perfect world Amazon would re-think their commitment to pushing Small Axe for Emmy awards, or at least separating Mangrove from the pack and pushing it for a Best Picture Oscar. They should definitely do this. There’s nothing wrong with changing your mind. Mangrove deserves the acclaim. 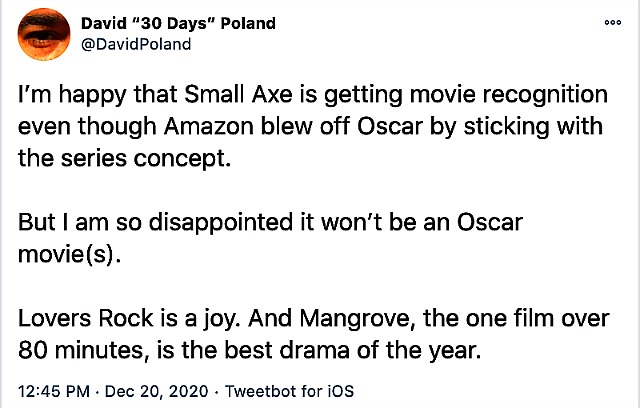 December 20, 2020by Jeffrey Wells75 Comments
« Previous post
The Worst Year Of Our Lives
Next post »
This Kind Of Writing